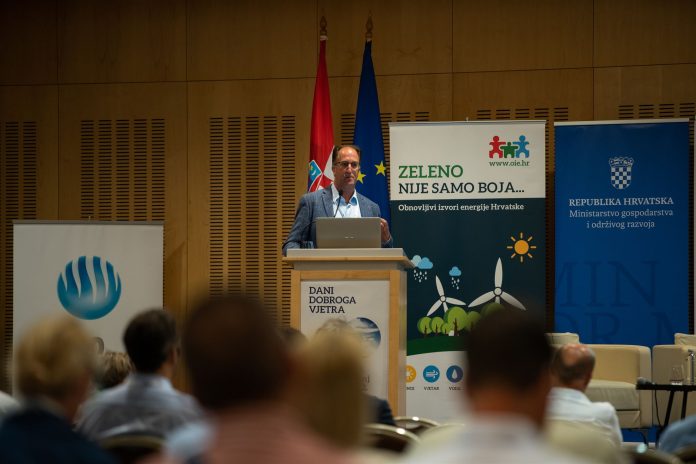 Hein Prisen, the senior consultant at the Dutch Ecological-Consultant Company, Bureau Waardenburg, which employs 130 workers and is one of the largest of its kind in the European Union, began his presentation at the Good Wind Conference with the words: „I will speak of solutions“. The company’s mission in the last twenty years has been to analyze in detail the data that can help in a better understanding of the impact of RES on the environment.

“We are now in a unique situation. The need for the powerful development of RES, such as required by the European Union today, is nine times greater that the goals set in the Paris Agreement.

Due to the concern about how this growth will impact natural resources, associations for the protection of nature are expressing their concerns ever more loudly.  It is estimated that the realization of these goals will call for a large surface of the earth and they are worried whether that will mean the felling of forests and draining of swamps which would naturally free large reserves of carbon naturally found there. If that would actually happen the volume of freed carbon would exceed the benefits achieved by the development of new RES facilities. Analyses have shown that as many as one-third of solar and wind parks have been constructed in areas with high levels of biodiversity. “New accelerated development due to the lack of space and impact of animal species will not be simple and it should be taken into account that due to the inadequate location selection, 50% of the requests will be rejected” – Hein pointed out.

Enough has been said on the negative, but where are the positive effects of the development of wind farms?

It seems that only the negative impacts of wind farms have been accentuated, forgetting at the same time that they have considerable positive effects on the animal world and the environment. It has been noted that due to climate change many animal species have changed their habitats and moved to other locations. Wind farms exist to alleviate climate change. During the construction of wind farms and in the course of their life span increasing attention is being paid to the impact on animal species that live in their surroundings.

“It is difficult to say how a wind farm will impact the environment and animal species – we need at least ten more years of research”, Hein pointed out. “Today, sensors are built into the turbines, cameras and radars used but even with them, it is sometimes difficult to say what the long-term consequences will be. What if the turbines have to be turned off and stop the operation of the wind farms, and we already had cases like that. Although developers did not previously understand the importance of the proposed measures – that has all changed now and they are ready to include preventive measures in order to step up the development of RES” – Hein assessed.

Some of the hurdles on the road to the speedier development of RES include slow administration and lack of personnel, fear of the unknown and lack of understanding and even the obsolescence of laws and provisions which are no longer applicable.

For example, in Denmark and Germany impossible requirements are prescribed, namely, research on how specific wind farms impact the entire migration route of birds which, for example begin their trip in Siberia.  No one can know that. “But after three decades of studying the habitats and animal species we have gained a considerable amount of knowledge. We can  already offer good guidelines for an improved and more qualitative development of RES”, Hein concluded.

For a successful project the most important thing is the selection of the location. “Among other, now we will get a fantastic tool: Go-to locations. We can even call them a specific type of luxury because we can buld there without stress”, Hein pointed out. He also noted that when choosing the locations, areas that are important for birds and bats should always be avoided. Absolutely and at all times areas of protected and endangered species should be avoided. With all the data that is available it will not be difficult to make up a sensitivity map.

Turbines are increasingly lighter and of higher quality and with the aid of radars it is possible to make a 3D map of bird movements. Today, technology enables us to follow every second of the birds’ lives and we know how they act within a wind farm as opposed to how they act outside of it, which is extremely valuable. “Owing to such and similar research, in five years we will have a much better overview of locations that are most appropriate for building new wind farms although as early as today we can begin with preventive measures and then only upgrade them”, Hein added.

Competitions are won only by eco-friendly projects

That’s how it is in the Netherlands – financing or the size of the project is no longer relevant. It is clearly stated in the public competitions that the developer that plans to promote and apply positive solutions for environmental protection has the greatest chance of winning the competition.

“If as a developer you set aside financial means for those measures, believe me, you will benefit a hundredfold.” Hein pointed out.

And in conclusion, he emphasized that one should not be afraid of making mistakes. It is important to learn from them and to correct them since the problem of climate change will not disappear of itself. We must be open to solutions and adjustments and we must act together. By acting synergistically for years with associations for environmental and animal protection in the Netherlands, problems have been solved together and agreements reached on the standardization of research and financing methodologies. This year they initiated research on the impact of using black blades for decreasing the endangerment of birds. Results from Norway show that one of three blades painted black can reduce the endangerment of birds by 70%. All these are fantastic news which should be researched and applied.

It is extremely important to share such information”, Hein Pinsen underlined at the end of his presentation.