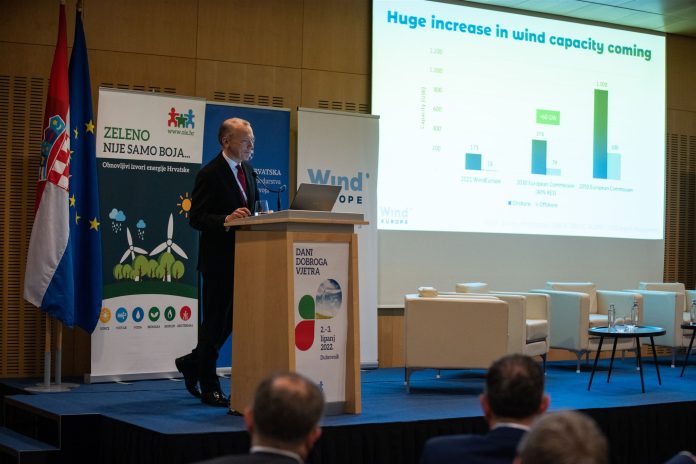 With its REPowerEU plan, the European Union decided to increase investments in renewable energy sources and most of the clean renewable energy is expected from wind farms. Presently, Europe has 190 GW of installed wind farm capacities and the plan is to increase them to 510 GW by 2030. It is generally expected that off-shore wind farms will give the greatest contribution to the set goals although there are still numerous places on shore for the development of wind farms. With these words, Giles Dickson, director of WindEurope, the European umbrella organization for wind energy, began his speech at the Days of Good Wind Conference in Dubrovnik.

“Of course, if Europe wants to achieve these goals it is necessary to solve two looming and important questions which have been tantalizing this sector for quite a long time. One of them is the supply chain and problems in supply at the level of Europe as a whole”, Giles Dickson pointed out, noting that all the large European companies that produce wind turbines and wind farm equipment have been operating at a loss, which is unsustainable.

However, Dickson emphasized that the greatest problem of RES development, is the multi-year waiting for permits and connections, noting that this problem is present in every European Union member state. The amount of paperwork, permits and decision required for one wind farms can be measures in metres, as already clearly shown by the documentation required for a wind farm in Germany.

For that reason, two years ago, the European Union initiated, together with the organization WindEurope, the RES Simplify project. Its goal is to detect all the bottlenecks, all the problematic areas, and all the obstacles in the collection of documentation for the issuance of wind farm permits. In the process, Dickson note,d RES Simplify also searches for examples of good practices. “The good ones should be applied more and the bad ones corrected”, Giles Dickson emphasized.

The purpose of RES Simplify is to improve efficiency in order for all of us to have as much clean and secure energy as possible. After two years of looking into the obstacles, today we know exactly what is greatest hurdle in each individual member country. In Croatia, for example, there is an appropriate procedure of connecting to the grid, but we are not so good at choosing the location for the development of wind farms. The administrative authorization is very inappropriate, particularly in regard to regional differences. Every county has its own complicated spatial plans which are a serious threat to RES development.

Likewise, Croatia decided that the technology recorded in the original application is the one to be applied, however, in the meantime, after ten years of waiting for the permit, it has become obsolete. In contrast, most of the EU member countries apply the rule that only the newest technology be installed in wind farms. Another problem in Croatia is the possibility of increasing the installed capacities when connecting to the grid. Most of the EU countries allow for increased capacity in some cases, even up to 100%, while Spain and Portugal, for instance, have no limitations regarding the increase of installed capacities. In Croatia that is not the case and an increase of only 25% is permitted.

In regard to the number of permits and documentation required for new wind farms, Croatia is close to the bottom in Europe but has, nevertheless in spite of these obstacles constructed in the last few years wind farms that have an installed capacity of 1.000MW and that supply more than 500.000 households with electricity. Croatian wind farms make up 11% of the overall energy mix in Croatia, while that share is 15% at the level of Europe.

WindEurope assesses that Croatia has the potential of constructing an additional 1400 MW of wind capacity.

The European Union is offering all the possible assistance in this respect, Giles Dickson pointed out, noting that each member country will receive a detailed overview of all the bottlenecks and greatest obstacles which inhibit the faster development of RES projects as well as recommendations how to solve these problems as effectively as possible. The creation of Go-to areas is proof how the EU has seriously tackled the problem of RES development and of shortening the waiting period for permits.

Areas exist, both onshore and off-shore in which there is no considerable impact on the environment, such as industrial zones, existing wind farms, ports, waste dumps, artificial lakes, and degraded land. In these areas, new wind farms and other RES projects will not require environmental impact studies and all other permits will have to be completed within a timeframe of one year. If within one year no answer is received from the competent bodies it will be deemed that their answer is positive and that construction can begin. Each EU member country should prepare a map of its Go-to areas soon.

For all other RES projects, including wind farms, according to the existing EU Directive on renewable energy, all permits must be issued within a period of two years. Unfortunately, in practice that has not been the case. None of the EU member countries have respected the provisions of that directive, particularly as regards the timeframes for the issuance of permits.  According to the REPower EU, this directive has also been put up for revision and by the end of this year will be voted on in the EU Parliament.

But before that, the ministers of energy from all the EU member states should give their opinion on the subject. This week they convened in Luxemburg and reached an agreement on the stand that the future of Europe rests in more renewable energy and that the key factor in the process is to remove the obstacles to faster development. The energy ministers of the EU member states agreed that the expansion of RES projects and linked expansion of the grid infrastructure on shore and off-shore in Europe should be considered an issue of “prevailing public interest” and “public security”. Thereby they gave the green light to the revised Directive on renewable energy and faster development of green energy projects.

“The procedure of attaining permits for all new wind farms should last two years at the most. Governments should ensure that this timeframe covers all the permits, including the environmental impact assessment and connection to the grid”, Giles Dickson pointed out supporting the decision of the energy ministers.

RES Simplify can certainly be one of the most useful tools that can be used by the governments of the EU countries for the faster, more qualitative, and simpler expansion of new RES projects.