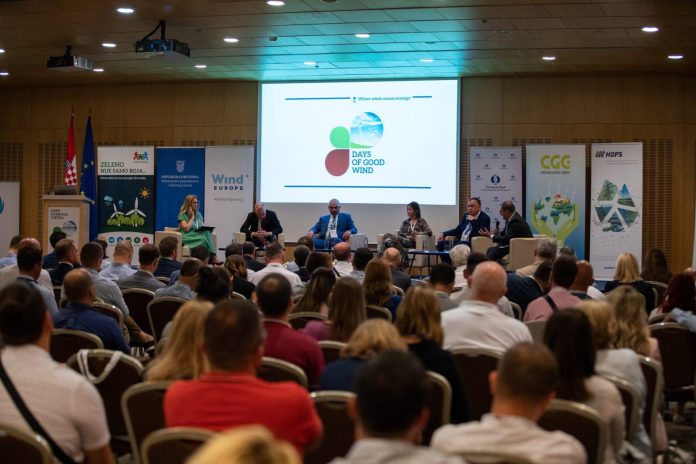 Due to the crisis and Russian energy supply, the European Union adopted ambitious plans and proclaimed that the production of energy from its own renewable sources is of utmost importance. It wants much more of it and it wants it urgently. How to achieve the wanted giga-watts of electricity from RES and what are all the projects that await us on that road forward was the topic of the exceptionally productive panel “Conditions for accelerating the energy transition”, moderated at the Good Wind Conference in Dubrovnik, by Maja Pokrovac, director of OIEH (Renewable Energy Sources of Croatia). The participants agreed that numerous obstacles existed along that road but also agreed that there could be no progress without the issuing of permits and simplification of procedures for new RES projects.

“We cannot emphasize strongly enough that energy produced locally is the cheapest energy. Wind and sun don’t cost anything and we have an abundance of them. Ukraine has really opened our eyes and the guidelines s for simplifying the issuance of permits, RES Simplify,  would undoubtedly help in stepping up the development of new projects” – Grzegorz Zielinski, Head of Energy Europe, EBRD noted at the beginning.

This was also confirmed by Giles Dickson, director of WindEurope: “That is truly a fact! For years we have been asking the decision-makers at the European level to help us in solving the problems with the long-lasting and complicated procedures for issuing permits. We asked for RES Simplify but no one listened to us. Today, there is no head of state that is uninformed about this question which was not the case beforehand. They are all attentively listening and actively participating in the resolution of problems in this field.

The State Secretary of the Ministry of the Economy and Sustainable Development, Ivo Milatić, pointed out that the simplification of the process of issuing RES permits is one of the greatest priorities of the Ministry and that Croatia places great hope in Res Simplify. Apart from the fact that in Croatia environmental impact studies take a very long time to be completed, property ownership relations are also a big problem so these European guidelines will help in the faster abolishment of bottlenecks in this regard. He also noted that the new tenders are to be announced soon and athe doption of the long-awaited by-laws, probably, by the end of the year as well as the expectation that a significant shift will come from HERA, as we are all eagerly expecting the HERA Methodology which is currently under public consideration.

“There seem to be many remarks on the methodology proposal and the Ministry will send its opinions and observations for consideration. We will do everything possible to have a methodology that is satisfactory both to the state and to the investors. Along with the HERA Methodology the connection regulations from HOPS are also awaited for and when the by-laws are passed our only problem will be financing and not how and how many projects we can develop and connect”, State Secretary Milatić noted. He was also critical of the frequent lack of coordination among the relevant grid institutions in view of the directives and pointed out that order has to be instituted in that regard.

Darko Belić, mr.sc., a member of the HOPS management board, commended the Electric Power Market Law which introduced considerable order and emphasized the importance of adopting the required by-laws. He underlined that HOPS, in spite of the problems appearing with the rapid development of RES, is ready for the green transition and is presently in the process of developing the grid for the connection of new  green energy projects.

“The challenge facing HOPs is that in the energy sector there are no “overnight” solutions. A few years ago renowned experts claimed that the grid could not receive more than 400 MW of new projects and now we are at 1200 MW. Rapid development is a challenge because in the energy sector there is no project that can be developed in under 5 or 7 years. Then again, today we have on the transmission grid about 900 MW of installed WF capacities. The signed contracts that are awaiting the connection to the grid these days have a capacity of 250MW and in two to three years another 759 MW will be connected to the grid.

Danijela Isailović, director of the Association of Renewable Energy Sources of Serbia noted that Serbia and the region often copy the solutions from Croatia and attentively follow what is happening in our country. Owing to the work of the RES Association of Serbia too, the Law on the Use of Renewable Energy was also adopted which clearly emphasized that RES is of national and public interest in the state. This was recognized by the investors since immediately after the passing of the Law a record number of requests for new wind farm projects was submitted.

“All of a sudden we were flooded with 13 GW of requests which blocked the country with everyone asking what were we going to do now, so we did the same as Croatia – we introduced the institute of a preliminary energy approval which halved the number of requests. We are now in the process of forming a new government, of facing new competitions, and it is clear that no one can stop the energy transition in the region”-

The Serbian Electrical Power Company began developing the Kostolac wind farm with a capacity of 66MW which is an important step for Serbia. Serbia as well as all the countries in the region are faced with numerous challenges regarding the issuing of permits and abolishing administrative and bureaucratic obstacles for new RES projects. Although not an EU member, it has already started implementing RES Simplify in its own manner and has started on time with the digitalization of vital processes.

Grzegorz Zielinski also spoke about digitalization pointing out that it was an appropriate way of accelerating the development of RES. A number of projects also imply the issue of financing. He mentioned how many countries use the successful forms of financing which are at the early stages of development in Croatia and the region, such a CPPA – Corporate Power Purchase Agreement, which was also considered in the continuation of the Conference, in the presentation under the same name as well as at the panel on financial and business models. He also mentioned that numerous examples existed of countries in which municipalities take loans and invest in the development of communities and numerous other ways of combining various ways of financing, concluding that there is no lack of money. If the project is good and ready – the financing follows.

“Up to now, renewables were mentioned only in the context of climate change and future electrification but have now, overnight, become an issue of energy security” – Zielinski noted.

Giles Dickson pointed out that all have to agree in order to initiate without delay the development of new wind energy projects and he wants Croatia to have another 1400MW of newly installed capacities. He agreed with the claims that the new sources of financing, such as cPPA are very good but that the desired growth is possible only in combination with state competitions. New RES projects are not the only important thing – in order for the system to function without obstacles, in addition to domestic grid capacities, it is necessary to invest in interstate grids. He also noted that wind farms will do everything technologically possible not to overburden the grid. He encouraged reflection on the required electric power in the future, underlining that the Europeans will use it for most of their energy needs, for heating, cooling, vehicle propulsion, and electrification of the industry and households.

“By 2050 we plan to use, for all our energy needs, about 70% of electricity from RES. Electric power from renewable energy sources will be the main source of energy in the future while today we are using only about 25% of it”, Giles Dickson remarked.

State Secretary, Ivo Milatić considers that Croatia is ready for the future,  pointing out that “along the area starting with Privlaka all the way to Senj, we can produce, in the winter by wind and in the summer by the sun, huge quantities of electric power from RES”. And if we add to this the potentials of geothermal energy, hydrogen, and Offshore power plants which are manifesting great possibilities for development, Croatia could satisfy most of its energy needs from RES.

Darko Belić, from HOPS, underlined that even if it seems that there are more problems than solutions “it is clear that we are all in the process of transiting to RES which undoubtedly means that we are on the same side” he added at the end of the panel which coincided with the conclusion of the moderator of the panel, Maja Pokrovac.

“In the end, problems are solved by sitting together around the table. That is the key. Air out problems without fear and seek solutions for what is best for Croatia. We, in the RESC Association know well how difficult it is at times to round up people at the same table, but when it does happen a path opens up that is best for everyone. Therefore I wish to thank all the panelists for their unselfish sharing of knowledge with all of us.”

The conclusion of the panel was that the future of RES is not questionable, nor is the speed of its development or even financing. The problems were detected as well as clear guidelines for their resolution through sincere and open cooperation that leads to the same goal – new RES projects and our energy security.