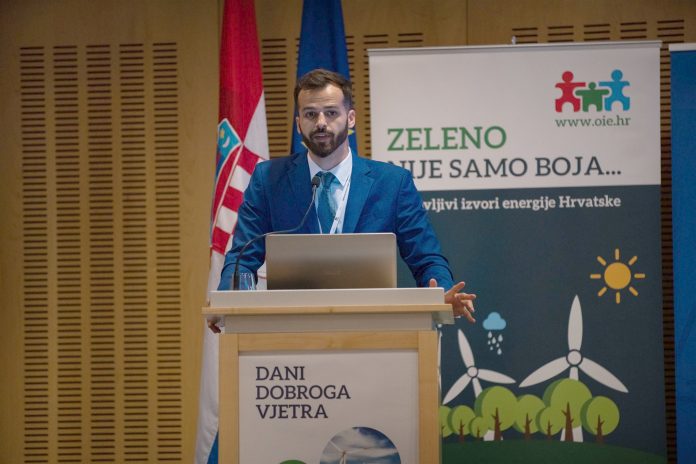 The REPowerEU strategy and impact of electrification on energy independence is the title of the presentation given by Ivan Komušanac, adviser for electrification in WindEurope, on the current state in and new objectives of the EU at the  Good Wind Days Conference.

Presently, 25% of processes and sectors have been electrified while the goal for 2050 is to electrify 57% of them. With the part of electrification that is planned to be achieved by hydrogen by the year 2050, a total of 75% of direct and indirect electrification is planned by that year. Why move in this direction? In the first place due to energy security and energy efficiency. Owing to electrification the current volume of the energy system will decrease significantly. Electrical vehicles are more energy-efficient than classic ones and the same goes for heating and cooling since heat pumps are more efficient for the energy system. It is important to note that not only the production of electric power should be taken into consideration but also how to electrify as many processes as possible.

However, the consumption of electric power will grow and that fact should be a priority, primarily for the system operators and for policies since increased consumption should be accompanied by increased production that should be planned on time.

Although it is more evident in the last 100 days or so, the prices of gas, oil and electric power began going up as early as the end of 2021. With Russia’s invasion on Ukraine, the price rise exploded thus initiating the entire concept of REPowerEU.

What is the current political agenda at the EU level?

It includes the decreased import of Russian fossil fuels, starting with coal with the EU importing 45.6%, then oil with imports standing at 25.7% and gas with the EU importing 39.1% from Russia. In order to decrease these imports, they should be replaced in some way. One of the ways is the diversification of the supply of gas through additional LNG capacities as well as additional capacities of biomass and hydrogen. The second way is the accelerated development of RES and higher energy efficiency regarding which ambitious goals are being set by the year 2030.

The EU Directive on renewable energy from 2018 set the goal of RES in the gross direct consumption of energy at 32% and Croatia proudly presented the goal of 36.4% in its National Energy and Climate Plan from 2019. However, everything has changed since then. We are no longer speaking of 32% of RES at the EU level. At the beginning of this year, the goal was raised to 40%. Now REPowerEU is earmarking 45% of RES at the EU level. This means that the Croatian goals for 2030 automatically also have to be raised. Although this presents a great challenge to the system operators since they have to attain a considerable increase of RES, the fact should be kept in mind that the President of the EU Commission, Ursula von der Layen, on the occasion of presenting the REPowerEU spoke of the acceleration and simplification of attaining permits not only for RES projects but also for projects linked to the transmission and distribution of electric power. And these projects will certainly benefit from the simpler attainment of permits. Great emphasis is placed on the grid and, accordingly, through REPowerEU,   additional 40 billion EURs is planned for investments in the grid.

Last year the EC predicted how much each country should increase its RES share in the production of electric power when the goal of 40% is set for the year 2030. According to that estimate, Croatia was to increase its share by 70%, and the EU an average of 65%. However, all that was prior to REPowerEU which additionally increased the envisaged goals. That means that all the member states should have higher RES shares in the generation of electricity. An important segment of it is the use of RES in heating and cooling. In 2020 the EU reached 23% while Croatia was somewhat above the average due to the use of biomass. However, the proposed goal of the RES share in heating and cooling, which was set at 40% by 2030, has now been raised to 46% through REPowerEU. How is this to be achieved? By the use of heat pumps.  They are the most efficient way, as is evident from the graphic presentation, which shows that the best results were achieved by Sweden, Estonia, and Finland, the countries that have the greatest number of heat pumps.

In the transport sector, the RES share objective for 2020 was 10% and in this regard, Croatia did not reach the goal. We are slow and it seems to be the most challenging sector for electrification. The EU’s set goal of the share of RES in transportation was raised to 14% with REPowerEU raising it now to 16%.

How will we achieve all this?

The EU  predicts that by the year 2030 we will have 1100 GW of wind and solar that will be the carriers of this electrification in a system that will have more than 1600 GW of installed capacities. They would include, within the framework of the REPowerEU plan, 65 GW of hydrogen electrolyzers. The intention is to produce renewable hydrogen as much as possible within the EU. The future is, however, very clear – REPowerEU clearly shows that wind and solar are the main bearers of electrification.