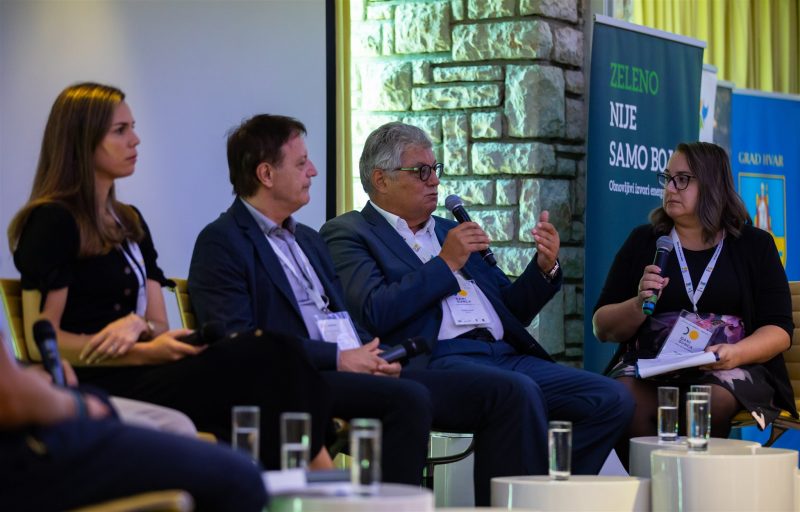 New materials in the production of solar modules, solar facades, batteries, SMO technologies, production of hydrogen from solar energy were some of the main themes of the panel ‘Solar technologies in Croatia’,  considered at the conference ‘Sunny Day’, held on 30 September and 1 October in Hvar in the organization of OIEH and the Island Movement.

Stjepan Talan, the director of Solvis, spoke of innovations in the sphere of solar facades, the solar future, priorities of mono-crystal in contrast to poly-crystal technologies…”We began as early as 2008 when poly-crystal technologies were predominant on the market. Two or three years ago mono-crystals took over the dominant role and that is where the future lies. They provide the potential of developing greater efficiency as well as a higher degree of purity and surface usability” Talan clarified. He also added that problems exist in relation to the supply of materials. “A considerable part of the production has been moved to China. In the beginning, Solvis bought solar glass from Lipik but in the meantime, the factory was closed and we have to import now. Likewise, we bought aluminum on the domestic market, in Šibenik, but unfortunately, we have to import it now. Solar cells are mostly bought from China, Taiwan, Vietnam as well as from Europe where we acquired about 10 percent of the cells”, Talan pointed out, As far as the future is concerned he believes that considerably greater production capacities will be required and that it would be beneficial to encourage production in Europe, particularly when dealing with the supply of component materials.

We need both small and large solar power plants

Ljubomir Majdandžić, from the Croatian expert association for solar energy, professor and entrepreneur who created the first solar energy-autonomous house in Croatia, commented on the current photo-voltage situation. He considers that Croatia has a chance to move up from the rear position it occupies when the production of solar energy is in question. “We will achieve that by developing 10 large, 200MW solar power plants and by installing photo-voltage systems on the existing roofs of public and private sectors. We need both, large and small solar plants,” Majdandžić pointed out emphasizing that priority should be given to solar power plants consumption sites.

Zdravko Krmek, director of the Sunceco company which deals with the development, production, and sale of solar equipment spoke of the technology offered by the company which in 2021 joined the European Battery Alliance (EBA) with a view to contributing to the joint development of European battery industry. “Sunseco is based in California and at the company’s headquarters technology is being developed for the production of battery joints and their management. The use of battery joints can be in battery containers and for the most part it will be possible to use them for e-mobility. Our technology has recently been tested in Croatia and we had very good results and our modules and joints can also be used for auxiliary grid services”, Krmek pointed out. At the end of 2019, Sunceco introduced a new line for the production of FN modules, with an annual capacity of about 30  MW. In addition, it developed a system that became quite interesting on the market, namely, solar overhangs with batteries. It is also working on systems that should solve the issue of engaged capacity, namely, the impact of fast-charging stations on the grid and a number of them have already been installed in Croatia. “Croatia will be on the EU map as one of the countries which produce battery joints for all automobile industries”, Krmek underlined.

Ivana Chaux-Jukić, board member of the Active Solera Company, the Croatian branch office which is developing the SMO technology in south-east Europe clarified the way this innovative technology functions. “Diversification is very important in the economy just as it is in technology. The SMO technology uses the energy of the sun for the production of hydrogen from waste. at is, let us say, an unorthodox way of using the energy of the sun for the production of hydrogen which is important in the diversification of the economy because such technologies can offer a complementary approach to the production and storage of energy. The hydrogen produced from waste materials by the energy of the sun can render competitive prices, Our hydrogen has a negative carbon rate, benefits the waste disposal sector and the goals of the decarbonization of the industry and various other sectors”, Chaux-Jukić pointed out, emphasizing that hydrogen is the star of the energy transition. Active Solera is currently in the process of developing a pilot project on the island of Cres and the construction is planned for next year. The energy capacity will amount to 2 MW and will process 27 tonnes of dried waste out of which 2.5 of hydrogen can be produced.

Frano Barbir, president of the Croatian Hydrogen Association reiterated the claim that hydrogen has become a star. “If we could electrify everything, then we wouldn’t need hydrogen. However, the fact is that we can’t electrify everything. By definition, batteries store a small quantity of energy for a short period of time, while hydrogen is perfect for large quantities. Hydrogen will justify its production if there is a demand for it, and there is because it’s the way to decarbonize the entire industry, the energy sector, and other sectors which are otherwise difficult to decarbonize. The production is also justified if we have energy surpluses that we can transform into hydrogen store it, use it as fuel in transport or even as a raw material in the industry” Barbir summarized, emphasizing particularly that today, hydrogen is no longer science fiction, as it perhaps was thirty or so years ago.

The synergy of all technologies is necessary, there is no single winner in the transition story

Edo Jerkić, director of the consulting firm Vivo Somnia, which deals with consulting on, developing, and managing renewable energy source projects, emphasized that the synergy of all mentioned technologies is required and there is no single winner in the story. “In order to connect it all, infrastructure is needed that will manage the flows of energy faster and more efficiently”, Jerkić said, tying in with the solutions contained in the new Law on the Electric Power Market, such as closed distribution systems, aggregation, and energy communities which are the foundations on which new business models will be developed. “Infrastructure is advancing, it is developing and the first aggregations are beginning to appear in Croatia, the first virtual electric power plants. We should look at the experiences with aggregations, where they already exist, namely, outside our country, and work on the education of the broadest public.”Jerkić pointed out. He added that electric automobiles will become dominant in the next ten years and that the grid will burden the electric power system, emphasizing that it will be an opportunity to work in combination with solar panels and batteries, which could stabilize the grid.