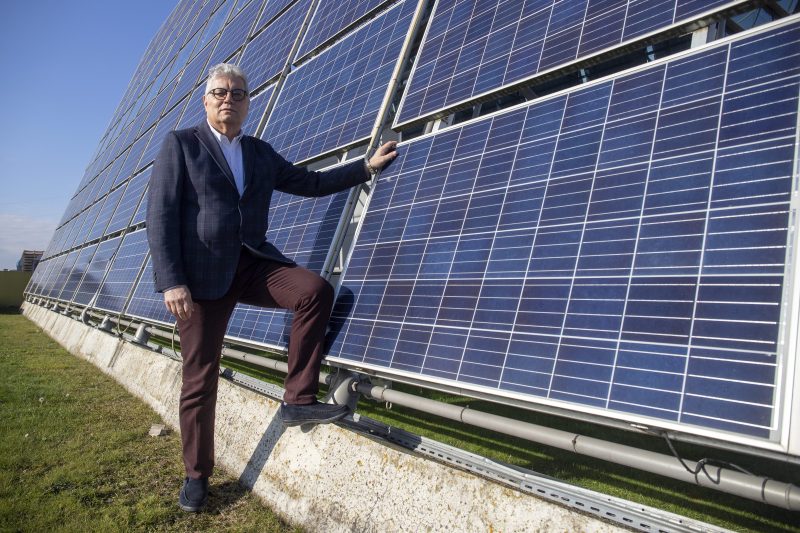 Solvis, the producer of photo-voltage modules from Varaždin, did by all means have a very successful 2020. Apart from ending the year characterized by the coronavirus pandemic with quite positive business results, the company also received a large order from Google for 120.000 solar panels.  That will certainly represent, according to the remarks of the founder and director of Solvis, Stjepan Talan, a significant reference that could open numerous opportunities in the future. The company from Varaždin however, has found its place under the global sun a long time ago. When Talan, a versatile manager, and innovator decided ten years ago to make a core change in his career and turn from pharmaceuticals to the solar industry, there was no real demand on the domestic market.  So the company turned to the international market. Owing to its vision and perseverance the company weathered every crisis and from the initial 15MW its production grew to the capacity of 300MW solar panels annually And today the company markets its products worldwide while numerous innovations became its recognizable trademark. Like, for example, the smart solar tree can be found in the center of Nova Gradiška as well as in Dubai and Morocco. At present, Croatia is also ambitiously moving toward the development of a green economy so that increasing opportunities are opening up domestically for the broadening of Solvis’s portfolio. We spoke with Talan about the potential of the solar market and cooperation with Google for the website of the Association of Renewable Energy of Croatia. We also touched upon industry trends, the need for simplifying the project development process, and the return of solar energy back to Europe.

The cooperation with Google began more than two years ago. Our Swiss partner which is actually an integrator (installer) and the Solvis engineer team, together with experts from Google, worked for months on the creation of the product, namely, a solar panel that would be acceptable both from the functional as well as an aesthetic aspect for installation at the new large Google data center in California.  Solvis had previously already produced a few series of the facade and non-standard roof solar panels built into new facilities, mostly in northern Europe, Denmark, Sweden, and the Netherlands. Therefore, they were “tailor-made” products. Google had found out about on the market and approached us, probably as a company that is developmentally and technologically oriented, namely, capable and ready to cooperate on such a project. Of course, it will be an important reference that could open up numerous possibilities in the future.

The pandemic had no impact on Solvis of any significance, only a few logistic delays in the supply of raw materials. But nothing of any greater importance happened so that the overall results for 2020 increased by the planned 10 or so percent.

At present Solvis employs 360 workers of which about 20 are highly qualified. The outlays for salaries, taxes and contributions are significant and it is not easy to acquire them.

The solar industry has continually been growing globally, including in Europe. Solvis already has its place on foreign markets and finally, Croatia too has started to follow these trends and we certainly expect an additional opportunity in that respect.

The solar future is very promising. Solar plants for the generation of electricity will be unavoidable and most probably commercially most cost-effective. It seems Croatia has come to understand all that and the present events and announcements are quite optimistic. However, processes in the administrative preparation of projects should be accelerated and simplified.

The production of solar panels should certainly be brought back to Europe and I believe such plans already exist. The development and implementation of the newest technologies should be stimulated and the procurement of new technological lines subsidized through European funds. Equally, the use of European products in European projects should also be stimulated in some way.

Solvis is continuing to follow the strategy of continual and stable growth and development. Investments in the procurement of new production lines, as well as the constant training of our personnel, enables us to keep abreast with new technologies and continual capacity growth Our place in the market is stable, primarily the European market, including now the USA in our portfolio and finally a very promising domestic, Croatian market should be added to all that.