Conference Held on Italian-Croatian Cooperation and Financing of Economic Recovery 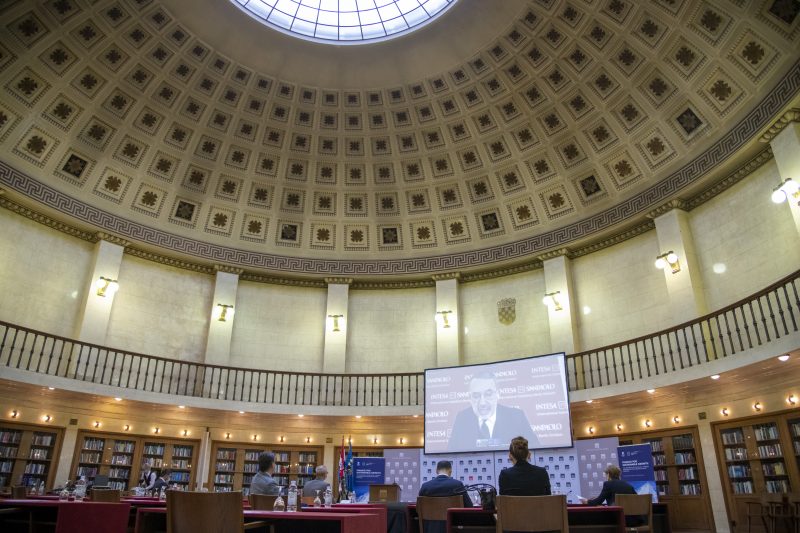 The basic idea behind convening the conference was bringing together experts from Italy and Croatia for a discussion on the key issues that powerfully link our economies. Our mutual goal which is at the same time the long-term European goal is to create economic conditions that promote sustainable growth based on the green economy, innovation and digitalization. The achievement of this goal requires financial support for small and medium-sized enterprises as well as for innovative and environmentally sustainable projects – governor Boris Vujčić said on the occasion of opening the online conference on Italian-Croatia cooperation and financing of economic recovery entitled “Finance for Sustainable Growth”, held on 11, November in the organization of the Croatian National Bank and the Italian Embassy as announced by the Croatian National Bank.

Furthermore, the Governor pointed out that the conference offers an opportunity for holding discussions on policies for the solution of our joint challenges and for promoting productivity and sustainable growth as well as for the further strengthening of Italian-Croatian cooperation in tourism, energy and finances.

The Ambassador of the Republic of Italy in the Republic of Croatia,  Pierfrancesco Sacco said on the occasion: Our current conference in this majestic hall and with numerous prominent participants manifests the value Croatia and Italy award to their historical friendship. The meeting of the Coordination Committee of ministers of the Republic of Croatia and the Italian Republic which was held ten days ago in Zagreb gives us an appropriate context. At the same time, the key political message is crystal clear: Italy and Croatia need each other.”

Ambassador Sacco also emphasized that Croatia and Italy share the view that prospects for recovery from the pandemic and increased resilience of their economy in the future are greater if they strengthen their ties on the state and policy levels but exceptionally important on the business level as well. “Due to their close connectedness the banking and financial sectors, as the bloodline our two economies are capable of modernization and a new beginning of the Italian-Croatian historical partnership”, the Ambassador concluded. The introductory speeches at the conference were given by Zdravko Marič,  the Vice-president of the government and Finance Minister of the Republic of Croatia, Manilo di Stefano, Deputy Secretary of State for Foreign Relations of the Republic of Italy, Ivan Barbarič, Vice-president of the Croatian Chamber of Commerce for International Affairs and the EU, Gianfranco Bisagni, Co-executive director of commercial banking for South-Eastern European countries, Unicredit Spa, Marco Elio Rottigni, Head of the sector for foreign subsidiary banks, Intesa Sanpaolo Spa and Daniele Franco, Director General of Banca d’Italia.

At the first conference panel “Public and Private Investments in Economic Recovery and Growth”, moderated by Milan Desfar-Škrbić, advisor in the Croatian National Bank (HNB), a discussion was held on the most effective ways in which Croatia and Italy could use the available funds and instruments of the European Union for mitigating the economic and social detriments caused by the pandemic. The deputy-governor of the HNB, Sandra Švaljek, Šime Erlič, State Secretary in the Ministry of Regional Development and EU Funds, Viktorija Zinehuk, Director of the European Bank for Reconstruction and Development (EBRD) in Croatia, Francesco Ruffoli, President of the Italian-Croatian Chamber of Commerce and Fabruzio Balassone, Head of the Administration for Structural Economic Analysis of the Italian Central Bank discussed among other the most prospective sectors for direct future foreign investments between Croatia and Italy and whether possibilities existed for joint investments of the two states in other countries’ projects, particularly from South-eastern Europe.

The participants of the second panel tried to define in more detail the role of the financial sector in the economic recovery and they included Vedran Šošić, the head economist in the HNB, Romeo Collina, CEO of Zagrebačka banka, Dinko Lucić, CEO of Privredna banka Zagreb, col. Pietro Blanchi, head of research and analysis in the Ministry of the Economy and Finance of the Republic of Italy (Guardia di Finanza), Marijana Oreb, member of the managing board of HAMAG-BICRO and Francisco Tilli, international relations director of the Italian company for financing and promoting the economy SIMEST. During the discussion, moderated by Marko Jurčić, advisor to the chairman of the Croatian Chamber of Commerce, the panel participants spoke of the most significant elements of the vigor of the Croatian and Italian banking sectors as well as of their potential risks including of the role of banks in supporting innovative small and medium size enterprises and initiating their business operations.

The topic of the third panel, energy, and business, was moderated by Maja Pokrovac, director of the Renewable Energy Sources of Croatia. Opinions were exchanged on the business possibilities provided by a circular economy and the opening of new paths of cooperation between Croatia and Italy through measures and reforms required for accelerating the transmission and development of renewable energy by way of financial instruments as support in the transformation of the industrial ecosystem and European Green Plan.  The participants of the panel included Tamara Perko, CEO of HUBOR, Milan Horvat, CEO of FIMA Invest, Alberto Pinori, chairman of the association of companies from the renewable energy sector (ANIE Rinnovabili) and Gianbattista Semeraro, project manager of companies for the development of industrial plants DATA EPC.

The last panel devoted to tourism was an effort to provide answers to the question related to the measures necessary to balance domestic and foreign tourist demand in conditions of a pandemic, the impact of a poor summer tourist season on future investments and direct benefits for the tourist industry from entering the Euro region. The panel was moderated by Damir Krešić, director of the Tourism Institute. The participants in the discussion included Tomči Glavina, State Secretary in the Ministry of Tourism and Sport of the Republic of Croatia, Kristjan Staničić, director of the Croatian Tourist Association, Želljko Kukurin, Chairman of the branch association of the Croatian Organization of hospitality and tourism employers, Marina Lalli. Chairman of the Travel and Tourist Federation, Federalturismo Confindustria and Paola Pacchiana, internationalization ambassador from the Association Startup Turismo.

The conference of the Croatian National Bank and the Embassy of the Republic of Italy was organized in a hybrid format, a smaller number of speakers and panel participants were in the Round Hall of HNB while all the remaining participants and the media took part online (virtually).