Trebinje Energy Summit 2021: principal messages for the more powerful development of the energy sector in the region 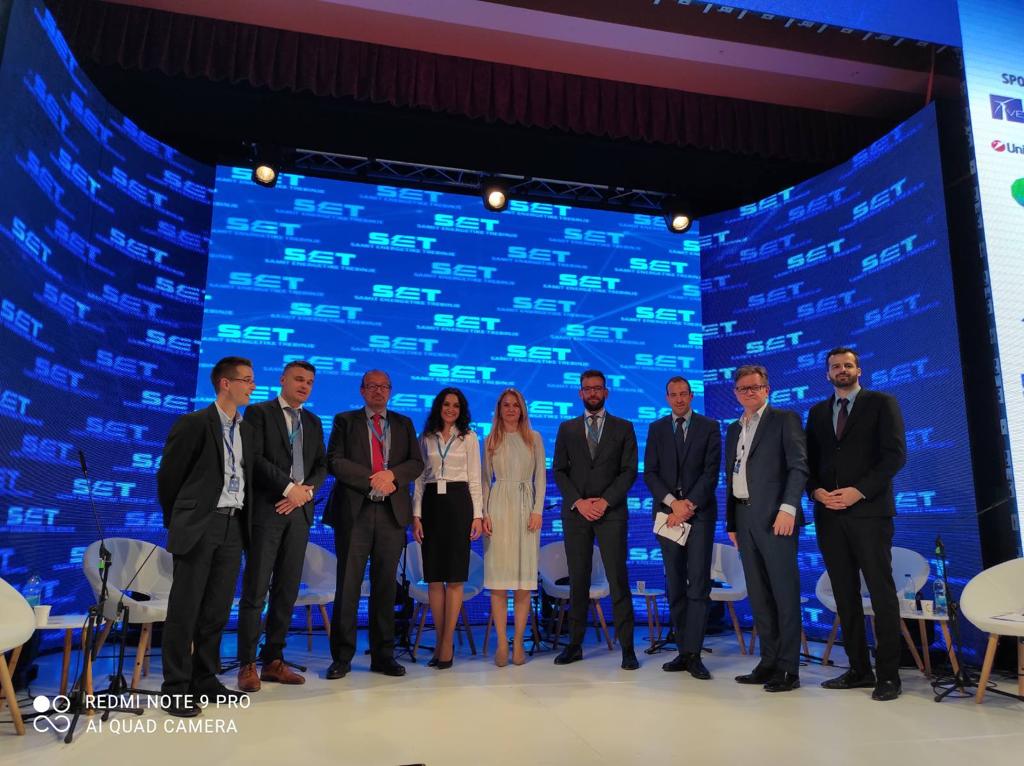 The  Trebinje Energy Summit 2021, held on May 20-21 in Trebinje has engendered seven main conclusions the realization of which could significantly improve the energy sector in the region – as reported by the website eKapija, the media sponsor of the event.

The sentence that marked the first panel undoubtedly was that the energy transition has to be implemented with the financial support of the EU. The main topic of the second panel was the need to work on projects from the RES field that would be partly or completely financed by EU funds. The continued liberalization of the electric power market, which was the theme of the third panel, implied the need of establishing an organized electricity market In regard to the topic of the fourth panel on the development of remote heating in the region, the conclusion was that it was necessary to organize the joint operation of heating plants together with local self-management units and the state in unifying the work of heating plants as well as to create incentive mechanisms for increasing the share of RES and energy efficiency in the very systems. The conclusions of the fifth panel can be summarized as the need to implement decentralization in order to enable the grid users to be active users of the system. The sixth panel on the development of RES potentials and their integration into the system sent out a message on the need of creating an appropriate regulatory framework and infrastructure for RES, which will increase investments in this sector in the entire region. At the last, seventh panel it was emphasized that green energy and the circular economy in the EU are replicated in the region, which will bring about an investment boom directed at strengthening the economy.

The key implications of the panels’ conclusions  are as follows:

The transition in the region has already begun. Needs have been established and steps taken in regulatory and technological fields as well as in respect to social awareness. However, it was also recognized that the share of RES in the energy mix, level of success in energy efficiency, transfer of required normative settings, levels, and models of incentives, which are all important for the success of the transition varies from country to country in the region. The panel participants agreed that the transfer of know-how among members would be quite beneficial.

It was also recognized that in the region, along with the goal of providing clean, reliable and available energy for all citizens, the energy transition is an opportunity to make the region more competitive and just and to make it environmentally, economically and socially sustainable and comparable with the European environment.

The region does not have sufficient capacities (primarily instruments of financing) for leading an effective race in the transition. It was likewise noted that the region itself will not be financially capable of funding the energy transition in the timeframe expected of it and that negotiations should begin with the Energy Community and EU on comprehensive support.

Owing to the development of technology, energy transition, in the long run, is not a costly endeavor. However, its implementation in the region requires extensive investments in the short term due to the large share of fossil technology as well as the social implications of the workers from the coal sector. In other words, the key factor is the lack of capital as well as the redistribution of capital from high carbon to low carbon assets and infrastructure.

Given that the high carbon prices in the EU have been identified as a threat to the export-oriented countries in the region (Serbia and Bosnia and Herzegovina) the need for a gradual transition of trading in emissions or other forms of including that cost in the cost of electricity was indicated.

Regional energy transition creates jobs in new sectors but also redefines or shuts down jobs in others. Policy creators at the national level must provide a sustainable transition.

Considering that electricity prices in the region were mostly lower than in the neighboring countries, the danger of energy poverty and the need for its cost-effectiveness were also indicated.

In many EU member states, citizens are increasingly becoming active consumers (prosumers), creating new relations. We are witnesses to a shift from a situation in which the energy policy was led by a few decisions in which it is initiated by actions of the majority. In addition, it was pointed out that this form of citizen participation in the region is still not sufficiently developed and that it should be recognized as an important success booster.

The strengthening of the grid system capacity to receive large quantities of RES has also been pinpointed as a necessity. A regional approach to this issue would be of help to everyone, requiring consequently a massive shift in the development of the regional electric power market.

The energy community is closely monitoring the creation of a unique regulatory framework and unified electric power and gas market.

Among the problems in Bosnia and Herzegovina is the variety of approaches and opinions of the individual entities in regard to adopting regulations on electric power and gas.

A problem exists in almost all the contracting parties with the introduction of a CO2 tax.

The decarbonisation procedure will be very hard to implement in the expected dynamics without the provision of favourable financial means and financial assistance of the Energy Community and the EU.

The electric power companies from all the contracting parties have plans for the development of energy capacities from RES.

All the panel participants are in agreement regarding the need of working on regional projects that would be either partially or fully financed from EU funds.

It is realistic to expect that in the future gas as an energy source will replace coal requiring, accordingly, more work on the development of gas infrastructure which is inadequately developed in the region.

The establishment of an organized electric power market (advance day and intra-daily markets) in Bosnia and Herzegovina is a precondition for the further development of the electricity market and its integration in the regional and common European electric power market.  However, solely establishing an organized market is not enough; it is necessary to ensure its liquidity.  A verified path to its liquidity is the joining of markets and that should be the common goal all participants in the energy sector of Bosnia and Herzegovina.

Considering the potential Bosnia and Herzegovina primarily has when the balancing of the electric power market is in question, a concept is imposed of establishing a regional balanced market and consequent integration into a common European equilibrated market.

The decarbonisation of the energy sector is a irreversible process. The transition from fossil to renewable sources is  both an opportunity and  a threat, but is necessary as the case may be. Currently it is not possible to precisely assess the impact decarbonisation will have on individual electric power market participants and energy sector as a whole, but it is necessary to come up with a good plan in order for the green transition to be in the function of exploiting opportunities and not effectuating threats.

The new circumstances after signing the Sofia Declaration offer considerable incentives through the fund of the Europe Investment Plan. At the same time the Declaration introduces significant obligations for all stakeholders (states, local self-government bodies, energy entities) to align with the EU climate laws, fulfil the commitments defined by membership in the Energy Community, draw up National energy and climate plans and gradually align with the scheme of Emission Trading. The panellists concluded that the ‘new normal’ of which remote heating is a part represents before all an opportunity to use the incentives and increase the role of remote heating in the transition. In order to respond to the new requirements it was concluded that  the reform of remote heating primarily implies the undertaking of the following:

Joint activities of heating plants, local self-governments units and the state on unifying heating plants in areas were necessary and possible as well as on the establishment of incentive mechanisms for increasing the share of RES and energy efficiency in the  very systems.

Establishment of more intensive cooperation with other energy sectors in order to come to hybrid solutions such as the electrification of heating through the use of heat elevators.

The panel successfully demystified the concept of a hybrid energy future and demonstrated the current trends in the development of advanced energy solutions.

The processes of democratization and digitalization in the field of electric power opened up the possibility of integrating new technologies and a synergic approach of all key participants in a new environment.

Decentralization which allows the grid user to be an active participant in the system generates the need for the faster application of new technologies and concepts whose full integration requires an adequate legal framework and a stimulating and encouraging environment.

We are living in times when increased global demand for energy and natural resources is expected and thereby its impact on climate and the environment. There is only one sustainable option – to focus on chains of values in production with a low carbon share, RES, energy efficiency, distribution security, investments in infrastructure, new skills, technologies and innovations.

All the panellists agreed that the future will have more renewable energy sources than there are today.

New RES projects are a challenge for the existing electric energy system making investments in the grid and new technologies of exceptional importance.

Investments in the region will increase when an appropriate regulatory framework is put in place and adequate RES infrastructure developed, providing thereby a green and sustainable future.

Green energy and the circular economy in the EU are reflected in the region, bringing about in the forthcoming period a investment boom resulting in the growth of the domestic economy, fulfilment of commitments and a safer and healthier future for all citizens.

The banking sector is increasingly gaining ground in the financing of   energy transition projects, namely, green technologies, striving to achieve economic recovery in a sustainable manner that will help authorities in fulfilling international commitments – according to Capital.