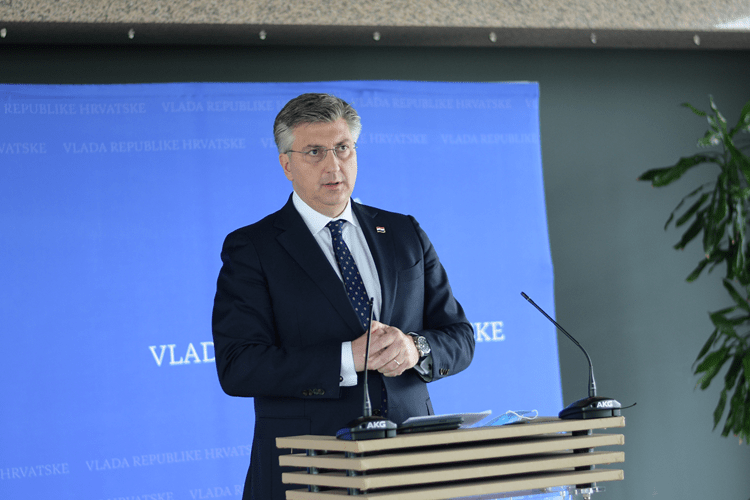 The Government adopted the proposal of the National Plan of Recovery and Resilience 2021-2026 (NPRR) worth 49 Billion which it is submitting to the European Commission for conformance. “Our wish is to ensure development and contribute to the growth of gross domestic product”, Prime Minister Andrej Plenković underscored.

As the Primer Minister pointed out, the idea is for the European Commission to give approval to the Croatian proposal of the NPRR so that Croatia can withdraw in the fall a down payment of 6.1 billion HRK. Answering the question of whether he is apprehensive about the implementation of the plan considering that in previous years numerous reforms faltered, the Prime Minister said that he expects an overall fulfillment of the NPRR goals.

We will fulfill the plan aided by experience and political will” the Prime Minister said, mentioning the considerable progress achieved in the withdrawal of European funds during the mandate of the current government as well as institution-building and experience in the withdrawal of assets from EU funds. He added that he expects some changes in the plan proposed by the European Commission but to the Government, quality is more important than the speed of the plan’s realization, also pointing out that Croatia has proposed solid projects that can be implemented in a short period of time.

The concrete projects he enumerated include investments in Rimac Automobiles, the bio-refinery in Sisak, the reconstruction of the railroad track Novska-Dugo and Oštarije-Knin-Split as well as the modernization of the Zadar airport, investments in the electronic payment of road tolls, fast internet, hospitals, and distribution centres. As he pointed out, the plan rectifies the ‘injustice’ from the past, namely, neglect of investing in schooling so that investments of 7.5 billion HRK are planned in order to enhance the resilience of society as a whole through youth education.

Asked if it was too late for possible objections to the NPRR given that the Government is submitting it to the European Commission and whether a comprehensive public discussion has been held on the Plan, he answered that the document has been thoroughly considered in Parliament with social partners and the ministers have discussed it with individuals from their departments. He pointed out that the current government proposal is still not final.