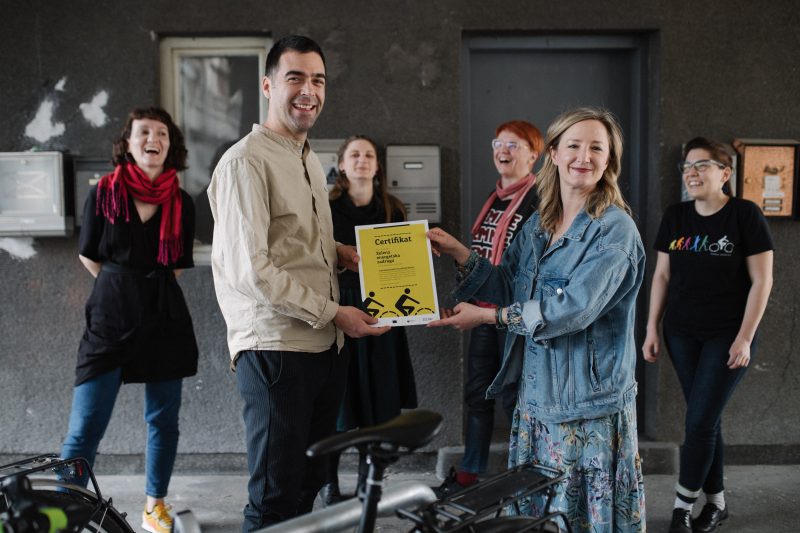 The Green Energy Co-op, Zelena energetska zadruga (ZEZ), is the first co-op in Croatia to receive the  Cycle Friendly Employer European certificate. Thereby, ZEZ has joined the international socially responsible company initiative whose goal is to reduce greenhouse gases and positively impact the health and social behavior of its employees – as announced by the Cyclist Union.

In Croatia the certification is carried out by the Cyclist Union Cooperative which is part of the European consortium “Cycle Friendly Employer Certification.”

“By stimulating its employees, clients and partners to use  bicycles as a means of transport, the Green energy co-op serves as a positive example of advocating for and implementing a sustainable manner of mobility and responsibility towards  one’s health, the environment and public space, including   cost saving”, the Cyclist  Union announced.

By acquiring the certificate ZEZ is now part of the international group of prominent environmentally and socially aware organizations which have up to now merited this certificate, such as for example, the Faculty of Electrical Engineering and Computer Science and Ericsson Nikola Tesla as well as the IT and marketing agencies FIVE, 404 and IN2.

“As members and employers of an organization whose focus is on the encouragement and support of citizens in using renewable energy sources, cycling to work is an imperative for us and a component part of ZEZ’s culture from the very beginning of our activities. By joining the international initiative of Cycle Friendly Employers our goal is to be supportive of the activities important to our employees, invest in the further promotion of cycling culture within our workplace but also motivate other employers in Croatia to take on part of the social responsibility for lowering carbon emissions by investing in cycling as the no.1 way of traveling to work”, Zoran Kordić,  the ZEZ manager pointed out.

ZEZ encourages its employees to use bicycles through a positive approach and motivation and by investing in cycling infrastructure, such as an appropriate covered bike parking space in front of the entrance to the workplace. In addition, it participates as an organization in cycling advocacy campaigns, such as the last International Day of Winter Cycling to Work, when it organized a cyclers’ breakfast for their employees and gave away appropriate “green” gifts to cyclists on the street of Zagreb.

The Cyclist Union is a voluntary co-op which is exerting efforts to improve conditions for bike riding as an efficient, sustainable, and healthy means of transportation. It also advocates and works on the transformation of cities into clean, safe, pleasant, and green cities, tailored to people, promoting cycling as a desirable means of transportation. “Citizens who cycle to work every day are precisely our target group and a rather large one! Their choice of moving around has a considerable impact on the traffic status in cities”, the Cyclist Union underscored. Certification stimulates employers to motivate their employees to choose bicycles as frequently as possible as their means of getting to work.

PrevPreviousInvitation announced for investments in digital and green transition in the amount of 1.12 billion HRK
NextWord Renewable Energy DayNext