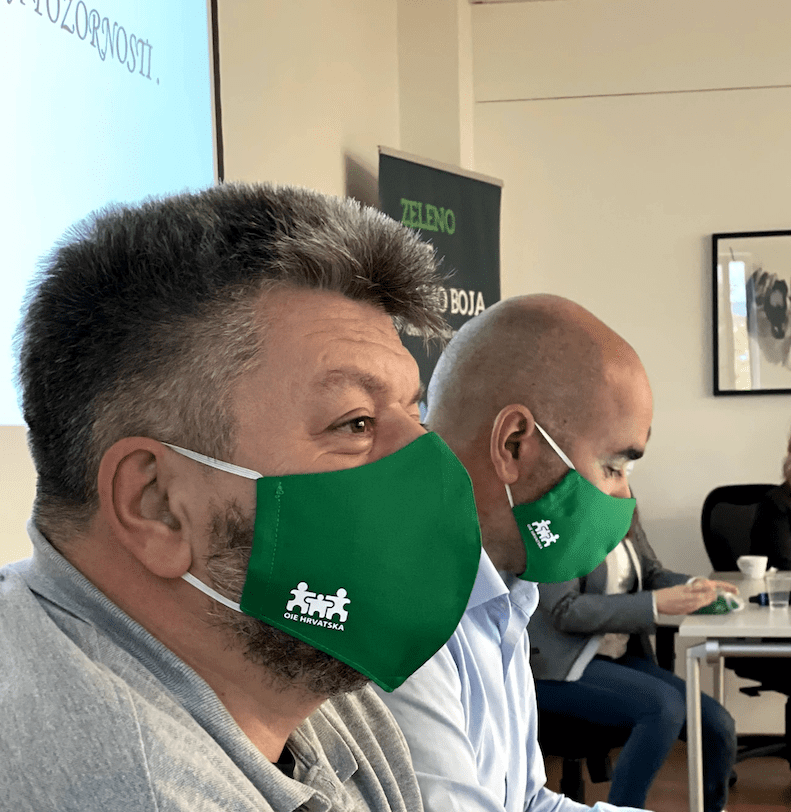 On Tuesday, October 27, 2020, the Renewable Energy Sources of Croatia (RESC) organized an educational workshop entitled The Premium System: financing within the new framework’. Experts from the sector held a number of lectures and presentations with the aim of clarifying the functioning of the new model of promoting production from renewable energy sources (RES), the challenges of the news system and implementation of projects and the conditions under which the financing will be carried out. The workshop assembled the representatives of the energy and financial sectors, lawyers, developers, investors and other interested parties in the development and investment in the Croatian RES market.

Nataša Putak (HROTE) presented the concept of the premium system of promoting the production of electricity from renewable energy sources in Croatia. The public bid for concluding a premium agreement and guaranteed selling price for the so-called small programme (projects up to 500kW in the system of guaranteed selling price and 500kW- 2MW in the premium system) was announced in late July and for the so-called large programme, the notification procedure in the EU is underway. The hitherto dynamics of concluding agreements on the buyout of electricity as well as how future public tenders will function was clarified. In other words, the ‘pay-as-bid’ system was selected, a model used at the beginning of the bidding procedures which is quite simple. The project holders offer prices that they wish to be paid and indicate them in their bids and precisely these prices will be paid to them if the bids are accepted (and if they are in the system of guaranteed prices). The price will of course be corrected by competition pressure. Likewise, in regard to the premium system, the monthly calculation of the market premium to be paid by HROTE to the preferential producer as well as the contracting roadmap have also been clarified. At the end of each year, a status balance will be made and the number of remaining quotas defined. The prices will also be updated and the periods and volumes of future tenders defined. HROTE will update the maximum reference values and maximum guaranteed purchase price according to technologies and groups of plants once a year and announce them not later than 1 April.

Regarding the financing of the system of stimulating RES, there are a number of key factors that will have an impact on the financial strength and liquidity of the system and dynamics of announcing tenders: the dynamics of the implementation of projects in regard to which an agreement has been concluded with HROTE and thereby have become part of the incentive system, electric power consumptions trends, RES production characteristics, projections of electricity price trends in the future, etc. It is difficult to foresee the dynamics of the project’s implementation, but according to the new model, it should be easier as a four-year period has been defined for the realization of a project. In addition, it was noted that some new models of financing the system will be considered in the future.

As far as auction price trends go, they are falling. The technological development in the RES field is the main generator of the fall and leads to a speedier decrease of CAPEX (capital costs), OPEX (operative costs), and LCOE (leveled costs of electricity production) than anticipated which will accelerate the integration of RES in the energy markets. Solutions suggested for the better integration of RES in the grid, including advanced production and load forecasts, inter-connections, new cables and reinforcement of existing ones in transmission, the inclusion of consumers in balancing, storage solutions, etc.

Development and financing of projects in the premium system

What are the aspects of a project, what steps are required, what are the effects of these steps on the market, and what could happen in the sphere of financing when expectations are focused on large programs for large projects  were some of the topics deliberated on in the lectures held by Ivana Dominković Cecelja Law Firm Dominković&Osrečak) and Vjeka Ercegovac (Akuo Energy Med).

The RES sector is a very turbulent, fast-changing field. Each project is different and should be placed in a legislative framework which is very challenging and a large number of the challenges are linked to the administrative procedure. It is a long-lasting, inconsistent and complicated process that takes a few years (regional plan, environmental and nature protection, connection to the grid, location, and building permits, and resolution of property and legal relations which currently generate the greatest confusion). All phases incur rather high expenses. These are at the same time the greatest challenges for the premium system and implementation of projects, namely, the readiness of the projects to bid for premiums. The greater part of EU Directive 2018/2001 of the European Parliament and Council of December 11, 2018, on the stimulation of using renewable energy sources, should be implemented by June 30, 2021. Among others, the Directive indicates that there should be one contact point for submitting the requests and that the processes of license issuing should not last longer than two years while the reconstruction of existing capacities not longer than one year. If problems with EOTERPs are solved (studies on the optimal technical connection solutions) – presently it is impossible to keep the given terms as the system is clogged – Croatia will be within the set frameworks. The concluding message emphasized the necessity of the timely preparation of new financial products and activation of the banking sector, clear communication on inacceptable risks, and efficient use of due diligence consultants by financial institutions.

Linked to the very process of premium model financing, the impact of the premium on the financing conditions was emphasized with a focus on DSCR (coefficient of debt coverage), final maturity, a reserve account, and deep screening. The main messages are that the auction system supports the further development of good projects and development of projects by established companies on the RES market which lessens project risks; a dynamic DSCR and longer maturity period ensures repayment and adapts to the project profile; the development of the RES market diminishes the need for a fixed reserve account and the projects become more competitive and resistant to market risks; the engagement of local legal and technical advisers will improve the quality and timeliness of the reports as well as the monitoring of the project during construction and operational activities. The banking sector is one of the key actors in the energy transition of Croatia, making it extremely important to monitor the development of the market and engaged the role of banks in the process of financing projects in the renewable energy sector.

In the last decade a considerable decrease in expenses in the construction of wind farm plants was registered (onshore plants 39 percent) and solar plants (82 percent). The lower prices were the result of decreased technology prices and technological advancements (higher power aggregates and modules decrease unit costs per kW), increased capacity factors, and smaller land areas required. According to IRENA data for 2019, the current LCOE for solar plants is 0.068 USD/kW, and for onshore wind farms 0.053 USD/kWh (we are nearing the limit of market prices). The constant growth in the installation of the mentioned technologies will certainly decrease LCOE and CAPEX in the future.

As far as Croatia is concerned, a significant effect on a greater LCOE and CAPEX than in the surroundings is reflected through the high costs of connection to the transmission/distribution grid and the high cost of capital. If we look to the future, the introduction of the premium model will ensure a higher level of investment security, which can significantly influence the costs of capital. However, it was pointed out that after filling the quotas according to technologies a certain level of insecurity and cost-effectiveness in regard to the plant construction is inevitable. It was therefore recommended that it is presently necessary to take into consideration the construction of energy plants based on CPPA (corporate agreement on the purchase of electricity) and the sale of energy according to market conditions. In order to make all this possible, it is necessary to ensure credit lines and work on various options of repurchasing electrical power.

When considering biomass and biogas, the power plants are connected to the local industry, integrated into agriculture and the wood industry which are the basic producers of electric energy. In these technologies, operational costs are higher and they have certain specific traits that others don’t have. This undoubtedly includes the efficiency of the plant which has to fulfill certain criteria (the efficacy must be higher than 50 percent). In other words, the premium depends on the efficiency of the plant. In addition, there is an obligation to procure 30 percent of the raw material from forest refuse which impacts prices and longevity of the agreement. It was emphasized that the price of thermal energy will increasingly become topical since it will not primarily be earned from the sale of electricity but thermal energy so the thermal power plants will have to attract a number of thermal energy users.

Continental Croatia has an above-average high geothermal gradient. In the boreholes at a depth of 2000m the average temperature of the water is 100 degrees Celsius and at 3000 m, 150 degrees, which was confirmed by a few thousand INA’s boreholes. A large volume of data on the subsoil and the possibility of recognizing highly permeable parts of geothermal deposits through the use of surface geophysical measurements imply low geological risk. According to the assessments of the Carbon-hydrogen Agency (AZU), the potential for the production of electricity amounts to 500MW. There are still no precise assessments but the potential is great for the heating industry (for example, used by the Ruris greenhouses) because it is a much cheaper process for exploitation given that high temperatures and great depths are not required.

The main problem with geothermal projects is the non-bankability of the research period and costly research activities. Each 3000-3500m borehole costs from six to eight million EUR, Research lasts from two to five years: it is longer and more costly if you have to drill the boreholes while if the borehole already exist it is shorter and cheaper. Therefore, currently, the idea is considered of defining AZU as an organization that can on behalf of the Republic of Croatia undertake research activities with resources from EU funds: drill the boreholes, test them, define the exploitation field and then offer such a package to investors. An additional complication of geothermal projects is that oil-drilling and electric-energy activities are taking place at the same time, while efforts should be undertaken to simplify the process of regional planning so that only the areas occupied by the plants, boreholes, and pipelines should be considered (which make up about 1 percent of the overall area of the exploitation fields) since the main thermal process takes place at a depth of three km and not on the surface.

Interest in geothermal projects is great all over the world. The oil industry is also shifting towards them. The interest of investors also confirms Croatia’s bright geothermal future which was manifested at the recent tender for geothermal waters research for which nine offers have already arrived. However, it was suggested that work had to be done in order to increase quotas post-2022. Up to 2022, it is realistic to anticipate 20MW geothermal electric plants although in the sector they hope for larger quotas in the future and for a good reference price since geothermal power plants due to high initial investments will not be cheap for a while.