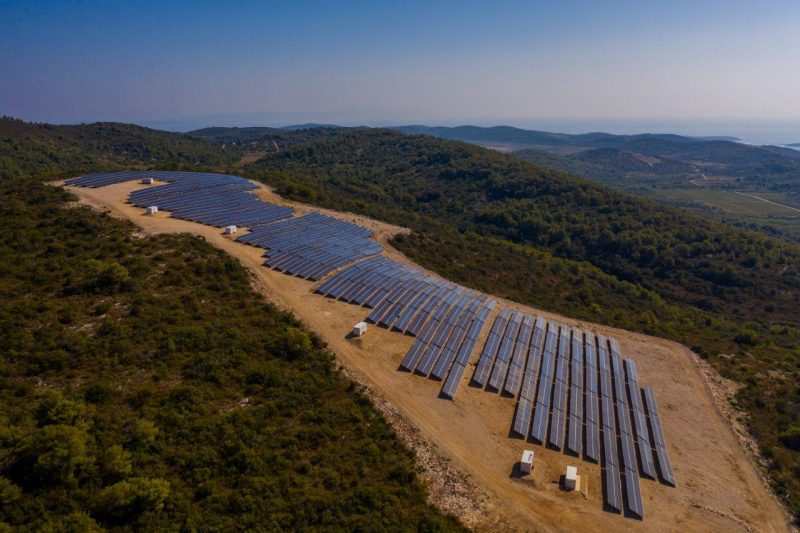 The representative of the Prime Minister of the Republic of Croatia and State Secretary in the Ministry of the Economy and Sustainable Development, Ivo Milatic, and the CEO of Croatian Electrical Industry (HEP), Frane Barbaric, put into service today the solar power plant Vis, the largest solar power plant in Croatia worth 31 million HRK. The Vis SP, with a power capacity of 3.5 MW is the first of seven HEP’s solar power plants that will be put into operation this year within the framework of a 750 million HRK cycle of developing solar power plants in the period from 2019 to 2023, HEP announced.

With the construction of the solar power plant, the island of Vis acquired its own source of renewable energy and increased security in electricity supply, particularly in periods of increased consumption during the tourist season.

“The putting into service the largest solar power plant in Croatia is a historical day for the island of Vis and the beginning of what will be evolving in Croatia in the next 10 years. The Government of the Republic of Croatia has as early as 2017 vigorously embarked on the realization of the energy policy of Croatia and the European Union, directed at investing in green energy. This solar plant is the best example of such investments and on behalf of the Government, I congratulate HEP and KONČAR on the implementation of this valuable investment for the Croatian energy sector and economy” Ivo Milatic, the state secretary in the Ministry of the Economy and Sustainable Development and representative of the Prime Minister of the Republic of Croatia pointed out at today’s event.

The Vis SP is the first large solar power plant built on a Croatian island. The plant with a power capacity of 3.5MW  will annually produce, without any incentives and completely on a market basis, about 5 million kWh of electricity, which corresponds to the consumption of approximately 1.600 households. It was constructed on the Griževa glavica hill near Žene Glave, 3.6 km southwest of the city of Vis and 4.8 km east of Komiža.

“The solar power plant Vis, along with a series of other projects under construction, is proof that today we in HEP  no longer speak only of plans and promises but rather of projects that are real and which are being implemented. Through the implementation of overall investment projects, and only this year we anticipate their realization in the value of more than four billion HRK, particularly projects with a large proportion of domestic components, we are powerfully contributing to the development and stability of the Croatian economy. We are focused on projects that are in the function of heightening the quality of life on the islands”, Frane Barbaric the CEO of the Croatian Electrical Industry, pointed out.

The works on the construction of the SP were executed by KONČAR –Engineering for energy and transportation, while the management and oversight of the construction were conducted by the company Fractal from Split. At the plant 11.200 340Wp, photo-voltage modules were installed, and five frequency transformers of the nominal power of 720kW which as one of the key elements of the power plant was developed and produced by KONČAR. The management and supervision system of the solar plant was also developed and produced by KONČAR.

“The result of the joint efforts of HEP and KONČAR on the road to energy autonomy and the self-sufficiency of Croatian islands is the development of modern projects like the first non-integrated solar plant here in Vis. I wish to point out that owing to the development of the KonSol transformer KONČAR provided the direct connection of the plant to the distribution grid and in that way decreased losses in the transformation of energy. I hope that by delivering transformers and plant management and supervision systems KONČAR will continue to follow HEP in the announced investments in the energy of the Sun” Gordan Kolak CEO of KONČAR – Electrical Industries d.d. pointed out.

HEP announced that in addition to the solar power plant Vis, a battery storage container of 1MW power and capacity of 1.44 MWh, the first of this size in Croatia will also be installed. The battery storage container will be used for providing services of balancing the electrical energy system and for preserving the stability of the grid on the island including the exchange and construction of underwater cables and charge stations for electric automobiles. HEP promotes supply security and contributes to the achievement of a high level of energy self-sufficiency of Croatian islands according to the highest environmental standards.  On average HEP invests one million HRK annually in the amelioration of the electric energy infrastructure of the island of Vis and in the next three years, it will invest nearly 30 million HRK in a number of projects, among which the most prominent is the laying of underwater cables between Hvar-Pakleni Islands and Vis and Vis-Bisevo, as well as laying 20-kilovolt cable lines between Ravno Stupisce and Smokova. In addition, works have begun on the installation of the first ELEN charger for electric automobiles on the island, in the city of Vis to be followed by the installation of the charge station in Komiza too.

“With the solar plant Vis, together with other solar plant projects under construction, such as the SP Vrlika and projects in development like the plant Bogomolja in Hvar and others, the Split-Dalmatia County remains the front runner in renewable sources in Croatia. I’m pleased that our beautiful island of Vis, thanks to the solar plant, is on the road of achieving energy self-sufficiency”, Blazenko Boban, the Prefect of the Split-Dalmatia County said. By 2030, HEP will construct another 1.500 MW of power production capacities of which almost half in the form of wind farms and solar plants, which will correspond to the power of the Nuclear Power Plant Krško. The investment cycle of building solar plants in the period 2019-2023 is worth 750 million HRK. The construction of the solar power plant Marici, near Zminj is underway with a capacity of 1MW and value of 9 million HRK, as well as SP Kaštelir 2, also in Istria (2MW, 15 million HRK), SP Cres, the largest solar plant under construction in Croatia (6.6 MW, 41 million HRK), SP Obrovac (5.5MW, 42.5 million HRK) SP Vrlika South (2.1 MW, 11 million HRK) and SP Stankovci (2.5 MW, 26.3 million HRK). By the end of 2020, the wind farm Korlat (power capacity  58 MW and the investment value of more than 500 HRK) will begin commercially operating as the first wind farm in HEP’s production portfolio.