Rimac Automobiles presented the design of its new technological campus 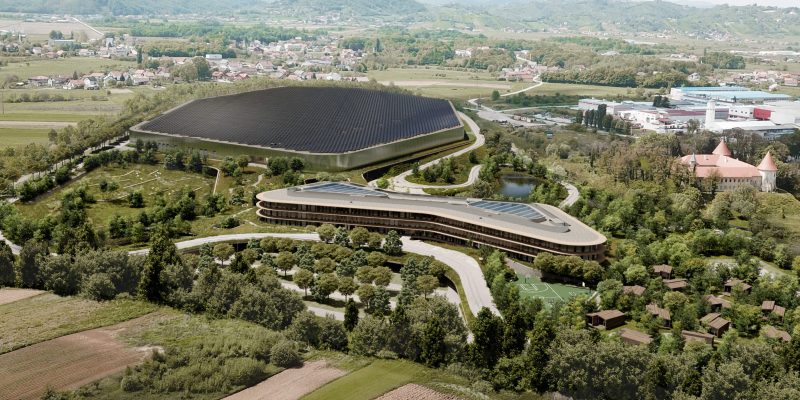 Rimac Automobiles presented today the project of its new home, namely, a campus that will contain a test track, accommodation capacities, and a museum. As clarified by the Company, the new complex will be the home base for research, development, and production and will enable the company to move forward from the manufacturing of prototypes and small series projects to large series production of electricity-driven high-performance assemblies and battery systems for numerous global automobile companies – as reported by Telegram.

The new complex was designed by the prominent Croatian architectural studio 3LHD and will be located a few kilometers from the present headquarters of Rimac Automobiles on about 200.000m2 of land, while the constructed surface will take up about 100.000m2. The new campus should be completed by 2023 and the beginning of construction is expected by the end of this year. The Rimac campus will be one of the largest structures of this type in Europe and the estimated investment in the project exceeds 200 million EUR.

The architectural studio 3LHD has already designed numerous significant Croatian and international projects, among which, the Grand Park Hotel and Hotel Lone in Rovinj and Hotel LN Garden in the Chinese city Guangzhou. In their designs of structures and complexes, they often integrate the spaces with nature and in the design of the campus, the architects found inspiration from multiple sources, including the shape and movement of Rimac’s super-automobile – C_Two, as well as speed itself.

The design of the main building focuses on how the four key groups will enter and move within the location. The employees will naturally be inclined to reach their workplaces as quickly as possible, while at the other end the visitors will most probably wish to enjoy the experience as long as possible and stay in the impressive common interior and outside spaces. The campus will contain numerous unique elements, such as an urban swamp and meadow as well as a garden on the roof of the restaurant.  Accommodation capacities will be an additional element of the complex.  Instead of a standard hotel for the accommodation of visitors and new employees a series of separate capsules is envisaged that will blend in with the forest surroundings.

For the employees, Rimac Automobiles plans to have a playroom, a fitness gym, a sports center, and even a day-care facility for children adjacent to a meadow with domestic animals. In line with the sustainability orientation, the on-site production of organic food is also envisaged as well as abundant greenery for the employees and visitors to enjoy. In line with the wishes of the company for multipurpose and adaptable spaces, an auditorium, conference hall, and education halls will also be incorporated into the complex.

In the long-term, Rimac Automobiles will have more than 2500 employees, which is double the number of those working there now. For that reason the location is divided into two different areas. The first building will host the head office of the company where the main functions of management, research and development will take place as well as the Greypa offices, a company for the manufacturing of electric bicycles, also founded by Mate Rimac.

This building will be connected to the production plant by a large glassed restaurant subtly incorporated into the landscape with a view to both sides of the campus. A retail center and day-care facility will be on one side and on the other, the reception and museum.   The production and test facilities, which include those for design and prototype construction, will be on the opposite side of them.  The entrance to the heart of the campus, machine processing production plant, composite production unit, paint facility, battery production and electric drive components site, vehicle assembly space and laboratory for quality control will all be located on the backside – according to Telegram.

The company announced that Rimac Automobiles, unlike most other automobile industry locations where high fences are put up and a level of secrecy upheld will be open to the public and the interaction between visitors, guests, inquisitive individuals and employees desirous and welcome.

PrevPreviousPoland becomes the first EU country in which e-vehicles batteries will be recycled
NextInvitation announced for investments in digital and green transition in the amount of 1.12 billion HRKNext