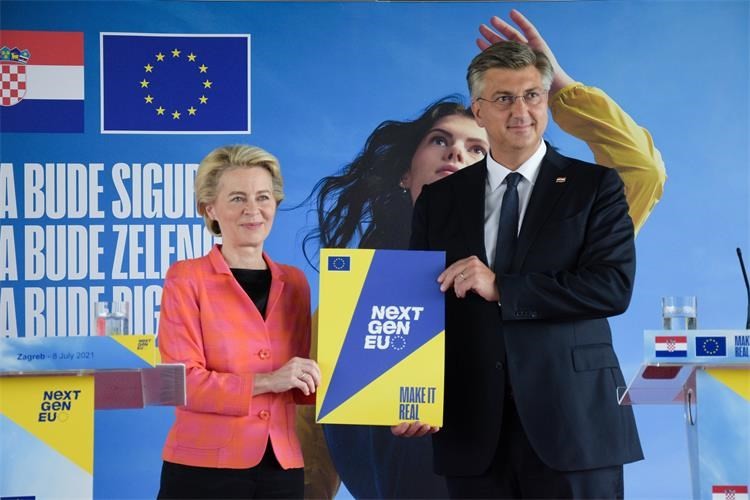 The European Commission on Thursday gave the green light for Croatia’s National Recovery and Resilience Plan (NPOO) worth 6.3 billion euros, which could increase GDP by 2.9 percent and create 21,000 new jobs by 2026. The assessment of the plan was personally made by the President of the Commission, Ursula von der Leyen, and handed over to the Prime Minister, Andrej Plenković, the Government announced.

Handing over the approved NPOO, the President of the European Commission, Ursula von der Leyen, pointed out that this is an extraordinary plan that will shape the economy and society in the years to come. On that occasion, Prime Minister Plenković thanked her for coming to Zagreb and once again expressed his satisfaction with the positive assessment of the Croatian National Recovery and Resilience Plan, which was adopted yesterday by the European Commission. “This document will enable the implementation of reforms and a financial weight of 47.5 billion kuna,” he said, emphasizing that these are really generous funds. He pointed out that the European Union had found a great answer to the big problem of the Covid-19 pandemic – and that is the Next Generation EU Mechanism. “Croatia received funds in the amount of 12 percent of GDP, far above the average of other EU members, and I am sure that we will use these funds for growth and development,” said the Prime Minister.

Answering journalists’ questions whether the National Recovery and Resilience Plan will deepen the gap between EU member states and whether she expects difficulties in its implementation, European Commission President von der Leyen said that the National Recovery and Resilience Plan is a comprehensive topic. “Its goal is to get out of this crisis stronger than we entered it,” she stressed. She reminded that the corona crisis did not affect all EU member states equally and that this was taken into account when allocating funds. She highlighted the strong and effective part of the investment plan. She expressed her belief that this is a great opportunity for Croatia’s progress. Von der Leyen noted that implementation is a difficult task for all 27 EU member states, expressing the European Commission’s strong support for Croatia on this path: “We have been working together in recent months and weeks to develop this Plan and I am convinced it will bring changes. “Hard, but good work is ahead of us,” she said.

Plenković emphasized that thinking about Von der Leyen’s visit, they decided on three important points, each of which has its own symbolism. “The meeting with the Government was in the National and University Library, which we completed and arranged for our presidency of the Council of the EU a year and a half ago. A symbol of our culture, our science, our literacy. Then we were in the Zagreb Cathedral, a symbol of our history, our identity, our faith, with gratitude that a billion euros of European funds will contribute to the reconstruction of the city of Zagreb and the Banovina from the damage caused by devastating earthquakes. The third point of this visit was deliberately chosen to be right here in Sveta Nedelja and in the company Rimac to show the Commission, the world, and the public that Croatia has young, creative people, innovators, people who fully understand the trends of the present, who will transform. into reality in the future “, Plenković pointed out.

Rimac’s project, he continued, will truly be a project of the future, a project that fully coincides with the goals of the 4th Industrial Revolution, with the European green plan: “I can say that it is one hundred percent digital and 100 percent green. It was on this track that we wanted to show that Croatia makes a very concrete contribution thanks to companies like Rimac, but also others, such as Infobip in Vodnjan, Istria, trends that are global, “he said, adding that the point of NPOO is to use these funds reforms and development, to support those who are excellent, who are brave, creative and who will also contribute to the creation of new jobs in the future, and in this way, there is no dilemma, safer transport and transport that does not harm the environment. He expressed satisfaction and thanked the President of the Commission for the visit and the decision to approve the funds to Croatia and Mata Rimac, whose future project will receive 1.5 billion from the National Recovery and Resilience Program.

“Seeing the presentation, I can say that I am deeply impressed. I saw the future here in Croatia. I saw the future of mobility. It is the answer to climate change, this protects the environment. Artificial intelligence serves people. Thank you Mate, I am going home full of impressions “, said Von der Leyen at the end of her visit.