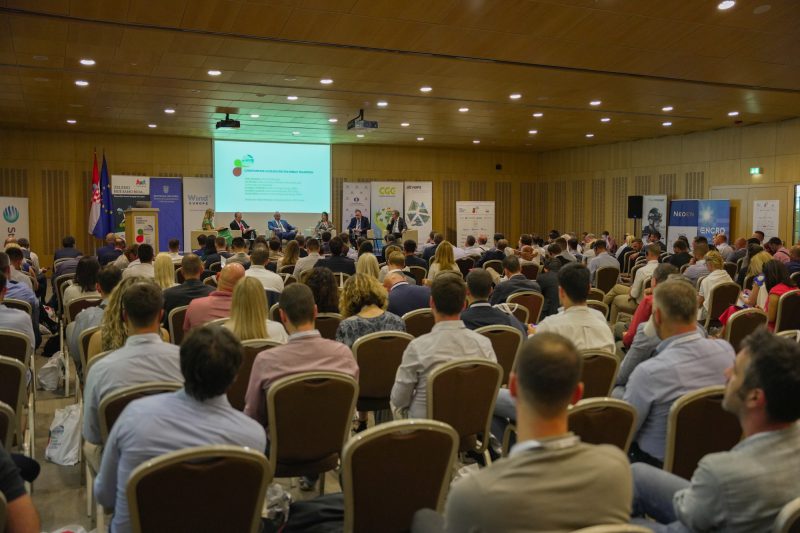 Days of Good Winds conference is being held while the whole of Europe is looking for ways to transition to renewable energy as quickly as possible. With the partnership support of WindEurope and under the auspices of the Ministry of Economy and Sustainable Development, more than 250 participants from Croatia, countries in the region, and Europe gathered in Dubrovnik for this major event organized by Renewable Energy Sources in Croatia. In her introductory speech, RESC Managing Director Maja Pokrovac emphasized the importance of the conference, as well as Croatia’s role in this region: “Colleagues from the region are very interested and want to cooperate with us. Croatia needs to work much better in order to have as many RES projects as possible. Europe does not want administrative barriers, our job is to remove them. The cooperation of all stakeholders is crucial and necessary for the further development of renewable energy sources. That what Europe wants is what we want – having as much renewable energy as possible, but at the same time it is clear that without cooperation we cannot achieve this green transition to the desired megawatts of installed capacity, which by 2030 will hopefully be 5.000 MW”, said Pokrovac.

Ivo Milatić, State Secretary, Ministry of Economy and Sustainable Development, pointed out that the Days of Good Wind are a real wind in the back of renewable energy sources. “Wind energy is significant, the potential is huge, Croatia has a good location, power plants that work 3.800 hours a year and the state has decided to introduce a systematic approach to the development of renewable energy sources. We have changed the laws, bylaws are being drafted, the network connection system is being worked on, and the methodology must be as good as possible. Everyone has to get involved in order to speed up and shorten the procedures, we are interested in that. Wind and renewable energy are strategically important to Croatia, and I hope that at the conference we will find answers together on how to achieve our green goals faster, without endangering the environment” Milatić said, concluding: “Our motto is to have applicable laws”.

With the new REPowerEU plan, Europe is asking Croatia to increase the capacity of wind energy projects with a new 1.400 MW of installed capacity by 2030.

To achieve this we need to simplify and shorten the licensing processes for new RES projects. They are long-lasting at the moment and Croatia is no exception, said Giles Dickson, director of WindEurope, the European wind energy umbrella association, a partner of the DGW conference.

“I am happy and honored that WindEurope is a partner of this Conference, which is taking place now, at a crucial time for energy in Europe. Croatia can still do a lot and has the potential for new wind farms and I look forward to showing you how you can achieve this,” said Giles Dickson at the opening of the conference. Later he spoke about how Croatia can achieve the desired megawatts of new installations by improving the licensing process and noted that the European Commission, observing the situation in each member state, identified specific areas for improvement.

“Under Croatian law, the technology that was in the original license application has to be used, and most European countries allow flexibility so the technology can be modernized, instead of getting stuck with what may have been the best five years ago,” Dickson said. He noted that it is important to remove these obstacles as soon as possible and also quickly establish “go-to” areas, places for the rapid development of RES projects for which permits would be issued within a year.

“When you have good and quality projects, it is not a problem to find a way to finance them, the European Bank for Reconstruction and Development, does it in that way. As the private sector is concerned, it should focus on what works well: identifying quality locations, developing projects, obtaining permits, and securing funding so that construction can begin” said Grzegorz Zielinski, Head of Energy Europe, EBRD and who was one of the speakers at the panel.

These conferences are important because they establish a dialogue between key roles – ministries, investors, county and local communities. Cooperation between them can influence the speed of project development.

“We knew how important the energy of wind and sun were, but this energy crisis has shown us that they are much more important than we previously thought. This is the right time and the right topic and I am glad that the conference is in the Dubrovnik-Neretva County, which has no other energy sources than renewable ones which we will continue to develop “, said Nikola Dobroslavić, Dubrovnik-Neretva County Prefect at the opening of the Days of Good Wind conference.

Dubrovnik Mayor Mato Franković said in his welcome speech that it is extremely challenging to manage the city during the energy crisis and that Dubrovnik was moving towards a green transition before the crisis so it is not surprising that Dubrovnik was selected as the conference venue.

“I am extremely glad that such an important topic is being discussed here in Dubrovnik, in a city that has in many ways always been ahead of its time. Dubrovnik has recognized the importance of investing in renewable energy sources and we are implementing many projects. I absolutely support the removal of administrative barriers to the development of new RES projects, while respecting our cultural heritage” said the mayor.

“Investing in renewable energy sources is investing in the energy security of a country because there is no better and affordable energy than that of one’s own country,” Grzegorz Zielinski concluded at the end of the first panel “Conditions for Accelerating Energy Transition” to which all the panelists agreed upon.