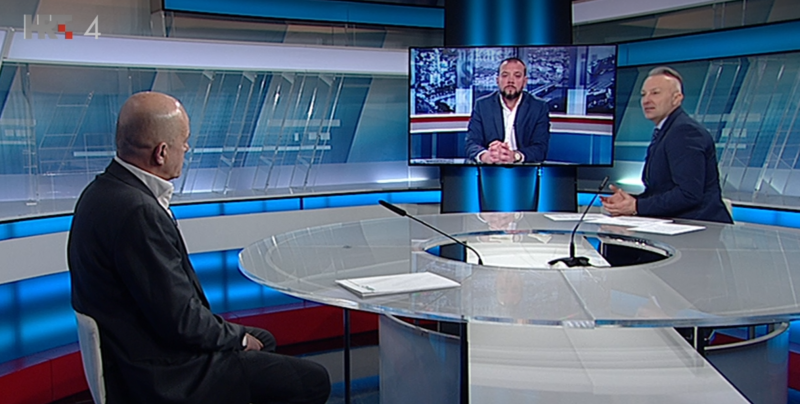 How can local communities in Croatia create and implement their development policies? Can smaller environments keep their populations from leaving for larger cities in search of a better life and work? Are there ways for small local communities to provide good living and working conditions? If resources are available then away also exists. Some will see opportunities in tourism, others in agriculture but what is with the third group who at first glance have no resources at all – apart from unused space in their physical plans. To those, perhaps the opportunity lies in renewable energy sources. This was the topic of a discussion led by Aljoša Pleić, director of Acciona energija and chairman of the board of directors of RESC, director of the company OIKON – Institute for Applied Ecology in a program broadcasted by Studio 4 of HTV4.

Pleić emphasized the important role of local communities in RES projects and clarified that from the very beginning of planning the development of a RES project a communication line is established with the local community. Local communities are partners in the project, Pleić pointed out, and in the last 15 years of developing RES projects in Croatia we have been witnessing their wish to have such projects in their midst. It gives them numerous advantages:

“Local communities have multiple benefits from RES projects. Their goal is not only to charge communal fees, which is actually the minor part of the positive effect, although RES projects have paid on behalf of communal fees, ranging from a few hundred thousand HRK to more than a million HRK. They have a few other direct benefits such as energy rent paid by each project as well as new jobs. In addition, every RES project helps the local communities in which it is located through sponsorships and donations by all our members”, Pleić pointed out and emphasized the economic, social as well as environmental impact of RES, including the domestic component in RES projects – services and equipment. That share of domestic components varies from 30-40 percent up to 60 percent such is, for example, the case in the first geothermal plant in Croatia and in the most recent wind farm projects.

In respect to the impact of RES projects on the environment, Hatić commented that this controversial theme in the media is more of a speculative nature.

“On the one hand we have global goals, the European Green Deal, national strategies and policies in which it is emphasized that are moving in the direction of renewable energy sources and, on the other, when the development of a RES project is initiated, the public reacts with resistance. RES are not only an issue of sustainable development but also of the inclusion of environmental protection experts as well as local communities and transparency of approach. It is the contemporary way od decision making, The component part of every project is the impact on the environment which is within the competence of experts.  Environmental protection is viewed now more seriously than ever before”, Hatić noted. He also pointed out the importance of cooperation between RES and agricultural production which opens numerous perspectives.  He noted the example of wind farm developed on agricultural land, pastures, biogas plants that are closely connected to agriculture, the synergy created by greenhouse production, etc. He particularly emphasized that today RES are no longer alternative sources, although they are often called that, but precisely the opposite –  today, fossil sources are alternative sources .

“The future of fossil sources is such that ores will be used as sources of raw materials in chemical and pharmaceutical industries for example. The EU has drawn up a major recovery budget and a large proportion of those funds are directed toward RES.  A social will exists and the EU has recognized investments in RES as an essential part of the whole story”, Habić noted.

At present we have in Croatia, and globally as well, electric power grids that are more than 50 or so years old. At the time they were built, the production and sources of energy were different than they are today. Today, however, everything is different, even the habits of consumers have changed. Great possibilities have opened up now to have as many resources as possible allocated through the Green Deal and EU funds to these ends”, Pleić emphasized.