The LARP Educational Programme: Maja Pokrovac Lectured on the Development of the Renewable Energy Source Market 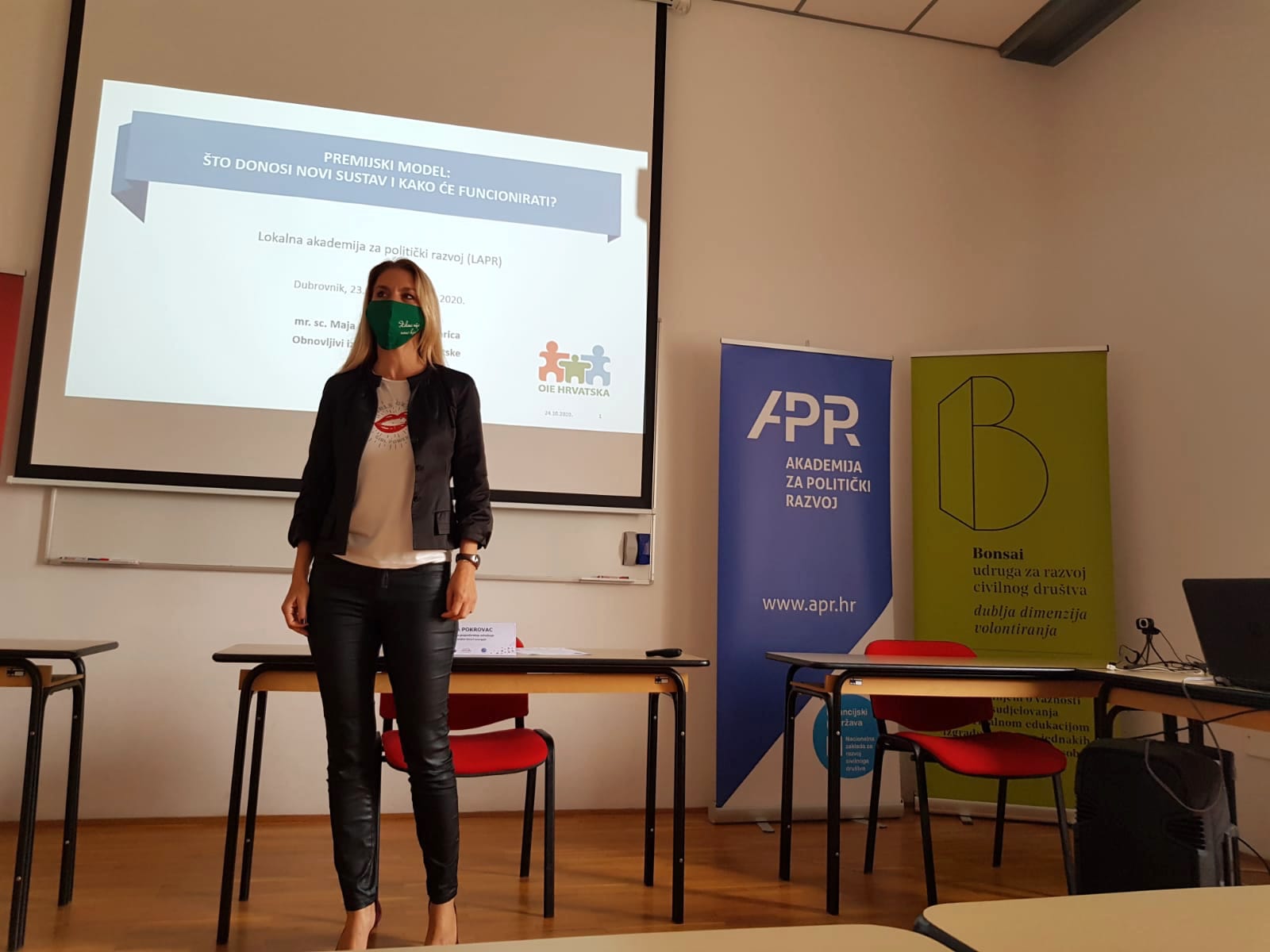 Maja Pokrovac, director of RES Croatia initiated a lively discussion among the participants of the educational programme ‘Local Political Development Academy’ (LAPR) speaking of the cost-effectiveness of renewable sources, priorities of production at the place of consumption, investment obstacles in Croatia, lack of high quality and ambitious strategies. She held a lecture for the participants of the programme on the functioning and new elements of the new premium model for the development of the renewable energy source market.

“Croatia has much greater potentials than most of the EU members countries located to the north of it. Today, Germany exports while Croatia imports green energy. Renewable sources have decreased our dependence on imports, but insufficiently. We are not optimally using all the green capital we dispose of”, Pokrovac pointed out in her lecture at an event in Dubrovnik, organized by the Association for the Development of Civic Society Bonsai in cooperation with the Political Development Academy (APR) and the Association of Cities.

She added that this capital was quite plentiful and did not include only green sources  which are abundant in Croatia but top experts working throughout the world and who are also a priority of ours in comparison to countries in the region. She also mentioned the significance of the Croatian component in the construction and maintenance of renewable energy source projects which is not negligible and can only grow in the future.

“Green energy is not only a trend but a necessity in the circumstances we are living in” – Pokrovac emphasized. Positive changes can be felt she added, but also clearly underlined the lack of ambition and more comprehensive education.

In addition to the premium model and renewable energy source market, renown experts and professional from the local and national levels spoke of alternative business models, protection of public goods, sustainability and responsibility in the time of the corona virus as well as of the reform of local self-management units, participative budgeting and many other current topics.

The LAPR Educational Programme, fostering development, dialogue and networking of stockholders in local communities, was held in Dubrovnik on 23-25 October. It was intended for the local administration actors, the media, civic society, scientific communities and entrepreneurs from the Dubrovnik-Neretva County.

The local APR – part of the ‘LARP project –Local APR Programmes’ came to Dubrovnik at the initiative of the Bonsai Association which has been, for quite some time, promoting volunteering, active citizenry, and the culture of dialogue. In other words, LAPR’s purpose is to empower local stockholders in the field of active and democratic citizenry and its active inclusion in all segments of social life in the local community,

To date, five cycles of the Local Academy have been implemented with more than 120 participants, in Split, Osijek, Zaprešić, Varaždin and Čakovec and now for the first time in the southernmost Croatian county.

You can follow all the lecturers and panellists from Dubrovnik on the link: