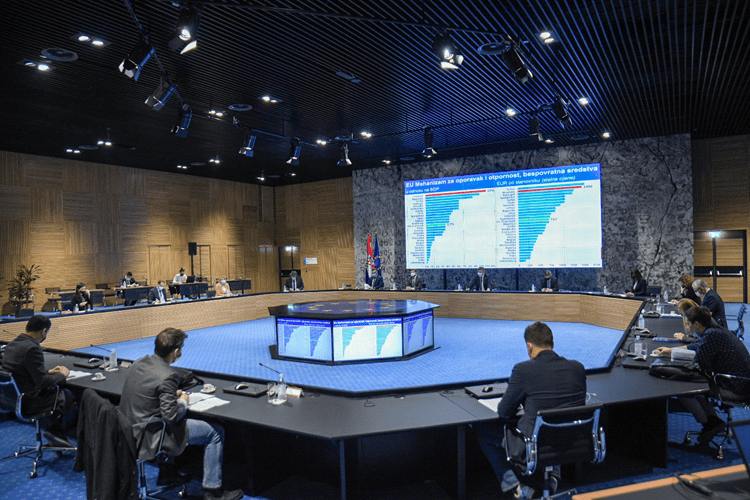 Prime Minister, Andrej Plenković, presented today the draft of the National Recovery and Resilience Plan – an announcement made by the Government of the Republic of Croatia. He called to mind that last summer when negotiations on the new Multi-annual Financial Framework were taking place, Croatia secured 24.5 billion EUR for the next ten years. When absorption of an additional 5.3 billion EUR is added to that sum from the previous Multi-annual Financial Framework to be implemented by the year 2023, that means that in the period covered by the National Development Strategy,  Croatia will have at its disposal from various European sources 30 billion EUR.

Grants in the value of 6.3 billion EUR for Croatia are the highest in EU in relation to the GDP

In regard to the next generation EU instrument, namely, assets from the Recovery and Resilience Fund, Prime Minister Plenković clarified that there were two groups of funds available. One pertains to the 6.3 billion EUR of grants which are subject to today’s presentation, the other 3.6 billion EUR of possible loans.

These are different lines from which we will finance various activities in Croatia”, Prime Minister Plenkovič clarified. He also pointed out that this 8.3 billion EUR in grants represent approximately 12 percent of the GDP in 2020. “No other member state has such a high ratio between grants from the Recovery and Resilience Mechanism and the GDP. The European average is 3.7 percent”, the Prime Minister underlined.

He added that according to the other criteria of the EUR per population number, Croatia is in second place, after Greece. He clarified that position by saying that the basic argument in the negotiations was that Croatia was the youngest EU member so did not have at its disposal like other countries at least two MFFs not to mention to what degree the other countries were privileged in using the pre-accession funds.

The Recovery and Resilience Mechanism was established to secure effective and considerable financial support for accelerating sustainable reforms and linked public investments”, the Prime Minister said, presenting its fundamental goal. He added that private investments could also be stimulated by public investment programs, among others, by financial instruments, credits, guarantees, loans, subventions, and by abiding to all the rules that relate to state incentives. “This mechanism does not distinguish between private and public investments as it is directed at the recovery of the economy on the whole”, he pointed out.  He also added that the use of the funds implies the implementation of reforms which are the component part of the National Recovery and Resilience Plan.

Three criteria for the approval of the plans – 37% green transition, 20% digital transition and environmental protection

Prime Minister clarified that three basic requirements exist for the national plans to be approved by the European Commission and then the European Council. The first requirement is to channel at least 37 percent of the funds into investments that contribute to green transition. The second is to invest at least 20 percent of the funds in the digital transition. The entire plan must comply with the principle of not causing significant harm to climate change.

He specified the manner of establishing priorities that were included in the National Recovery and Resilience Plan. The first and rudimental document they followed was the Government’s programme from July 2020 which served as the framework for the direction of activities during this mandate. The second document was the National Reform Programme, and the Prime Minister pointed out that this year’s National Reform Programme and the National Recovery and Resilience Programme merged into one document. The third element included the special recommendations of the European Commission which served as a particular guidebook and direction for undertaking reforms within the European semester. It was followed by measures linked to the European currency exchange mechanism II which Croatia accessed in July 2020. And finally, the most comprehensive document – the National Development Strategy.

“The purpose of the National Recovery and Resilience Plan are concrete reforms and investments. There can be no investments without reforms. These are not funds given by the European Union to a government that then allocates it to anyone who has some problems after the Covid-19 crisis. That’s not it! It is very important to do away with such a conception since these funds are not intended for that”, the Prime Minister stated and emphasized that this recovery plan is in effect our tool for reform and transformation and that it should contribute to a more favorable structure and greater efficiency of the economy.

He also added that the Plan should enable our transition to a circular economy through the more appropriate disposal of water resources, waste, and natural resources. It will contribute, he underscored, to a more efficient public administration and the judiciary and to improved services to citizens and entrepreneurs, the development of a high-quality system of education and science, and stimulate excellence, innovativeness in children and youth. It will also contribute to the new and innovative employment policies, promotion of the pension scheme, quality social protection, modernization of the health system and energy restoration, and anti-quake reconstruction of buildings.

After a thorough analysis by all the ministries, the Government structured the Plan in a number of components. The first component is the economy, the second, public administration, the judiciary and state property, the third, education, science, and research, the fourth the labor market and social security, the fifth, health care, the sixth, building reconstruction.

When speaking of the adoption of the national plans, Prime Minister pointed out that as a rule they should be submitted to the European Commission by April 30, which, he added, was not a fixed deadline because presently many countries are still intensively working on their preparation. After today’s adoption at the session of the Government, the plan will be on the agenda of the Parliament on April 14 while it was presented to social partners a few days ago. After its approval, the Commission will submit the document to the European Council and its endorsement will be followed by a decision on the advance payment of funds. After that, Croatia will receive an advance payment of 13%, about 5.1 billion HRK and then twice a year requests will be submitted for implementation funds.

“In handball terminology, we are in a three-step position. First, we are to draw up an Investment plan and the assets in question are in the form of grants – no participation or loans here. Then we go on to a multiannual financial framework, where the national participation amounts to 15% – namely, 85% of European funds and 15% of our own. And the third step, for which we have time until 2023 for an additional 3.6 billion EUR from the Next Generation EU Instrument”, the Prime Minister clarified the procedure for using all the funds at the disposal of Croatia after the negotiations in July of last year.

All relevant information and specific projects in one place

A website has been formed, planoporavka.gov.hr, containing the document itself and all relevant information and all the ministers are speaking with partners and stakeholders from their ministries and explaining in more detail the very reforms and investments.

The Prime Minister underlined that the document adopted today was a summary of a much larger document in which all the projects are elaborated in detail and which has approximately 700 pages. However, in regard to specific documents to be financed from the RRF, one of them is the bio-refinery plant in Sisak, and then investments in the Rimac Automobiles Company, Tomislav Ćorić, minister of the economy and environmental protection pointed out. A significant number of projects are from the field of water management and municipal activities which already have building permits and he also announced horizontal subsidies to private businesses – according to government reports.

PrevPreviousProject of the Strujni krug Association: 100.000 chargers for e-vehicles in public lighting columns by the year 2026
NextRimac Automobiles presented the design of its new technological campusNext